Is Aujeszky's Disease Important in Wild Boars or Only in Pigs?

More often than not, the solution to a disease of domestic cattle involves looking to their wild counterparts. With that in mind, let's look at Aujeszky's disease. 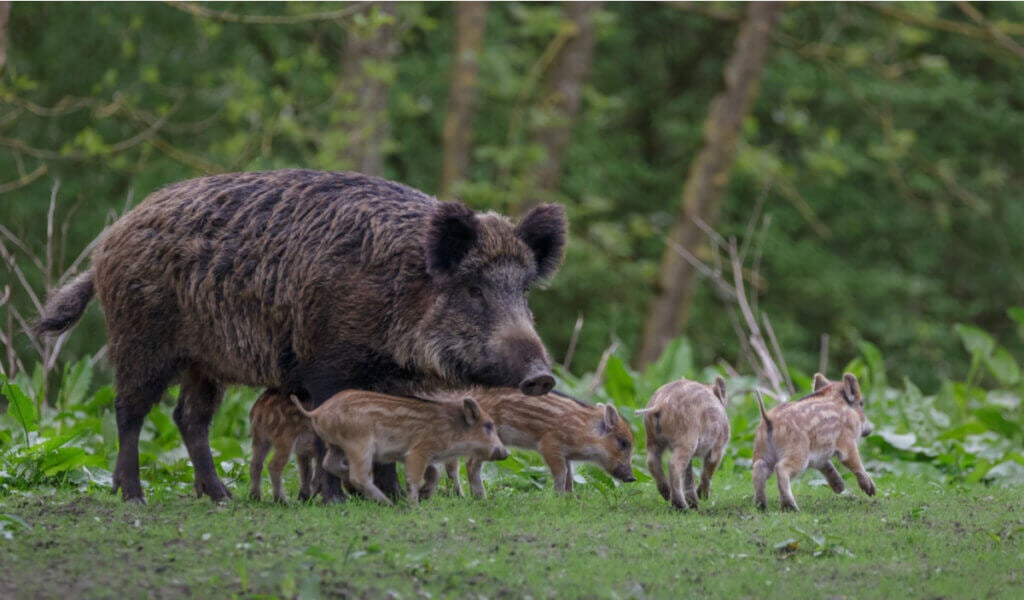 Aujeszky’s disease is a viral pathology that affects the swine species. It’s one of the most significant diseases for livestock from an economic point of view, due to the high mortality rates it causes in farms where pigs are kept for fattening.

Not only is the fact that the infection affects domestic pigs a concern. Experts have known for some years that the wild boar can also carry the virus and spread it around the territory, so it can spread to domestic livestock very easily. Here, we’ll tell you everything you need to know about his strange-sounding disease.

The causal agent of this disease is the porcine herpesvirus type 1. Although it’s more appropriate to speak of Aujeszky’s, the truth is that we’ve referred to this pathology for quite some time as pseudorrabia. This may mislead the public, since the virus itself has nothing to do with the rabies pathogen.

The target species of this virus is the pig, both domestic and wild. However, other mammals such as cows, sheep, goats, dogs, cats, and humans are also susceptible to the disease. What’s certain is that this pathology is usually only fatal in animals.

The virus is eliminated in the saliva and nasal secretions of infected pigs by the respiratory route. In addition, it can survive for several hours in the air and contaminate all types of mediums and surfaces. Viable viruses have even been detected in feces and milk after several days.

Some studies claim that Aujeszky’s disease virus can remain viable for months in manure.

It’s an enzootic disease–present and continuous–in areas of high animal density, such as piglet feedlots. The adult pig, in fact, is very resistant to the virus and only acts as a constant carrier and eliminator of it.

Transmission is by direct or indirect contact with respiratory secretions and fecal excretions, where the virus is found. Unfortunately, this is a very contagious disease.

The most problematic way of transmission is the respiratory route, because it’s the most difficult to control. As an exception, it’s important to note that, in the case of reproductive sows, they can also transmit the virus directly to the fetus via the placenta.

Symptoms in the pig, the main species that Aujeszky’s disease affects

Individual diagnosis has always been complex, due to the lack of symptoms in adult pigs and mortality in piglets. The symptoms are very limited and not very revealing when it comes to diagnosing one pathogen or another. Therefore, it’s important to differentiate between this disease and others like colibacillosis or flu.

If veterinarians suspect Aujeszky disease, then it’ll be necessary to confirm the diagnosis by means of laboratory tests that detect the genetic material of the virus. This is the case of PCR or cultures of samples from the animals in laboratories.

As there’s no specific treatment against the virus, the best prevention and control tool is vaccination. In general, it’s recommended that all pigs on the farm, reproductive male and female, undergo mass vaccination three times a year at regular intervals.

This mass vaccination helps reduce the excretion of the virus and improves survival. Thankfully, this has lead to the perhaps complete eradication of the disease in domestic pigs.

Despite the success of vaccination control programs, we can’t forget that there’s a risk of the virus returning to domestic livestock. How? Through contact with wild carriers: wild boars.

The biggest problem comes when countries have extensive pig production systems – for example, the black Iberian pig. In these production models, contact between the domestic pig and an infected wild boar is very likely. This puts the definitive elimination of the disease at risk.

Therefore, while the vaccine is the best tool to prevent and control Aujeszky’s disease, it’s not useful on its own. Rather, it’s crucial to accompany it with biosecurity measures in pig farms to avoid contact between sick animals.

Above all, it’s essential to avoid contact of domestic livestock with wild reservoirs and, finally, to carry out strict control of the virus directly on the reservoir.

Porcine Respiratory Disease Complex in Pigs
And one of the illnesses that pigs may suffer from is porcine respiratory disease complex. Find out all about it in this article. Read more »
Link copied!
Interesting Articles
Wild Animals
Fauna of the Andes