5 Animals from the Sahara

Mammals, insects and reptiles, among others, have perfectly adapted to the hostile desert climate and lack of water. 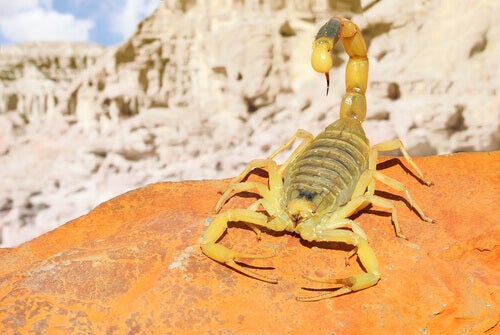 Surrounded by sands, with highly fluctuating temperatures between day and night, and quite a significant lack of water, animals from the Sahara have adapted to the desert and survive in their own way. In this article, we’re going to look at some of them.

What are some animals from the Sahara?

Desert fauna have to live a very tough life with so much heat and sun during the day and freezing temperatures at night. In addition to the typical camel and goats –both domestic– there are other animals in the Sahara:

This species of venomous scorpion – seen in the photo at the beginning of this article– is about 10 cm (4 in) long. This animal is very striking due to its yellow color that stands out in the sand, with a black tail tip. It’s commonly seen not only in the Sahara, but also in other desert environments of Africa and the Arabian Peninsula.

The venom of the yellow scorpion is really potent, as it consists of several neurotoxins, including peptide chlorotoxin. The sting is very painful and can be fatal to children or people with heart problems, in whom it causes pulmonary edema.

2. Fennec fox: a common animal from the Sahara

This small fox is well-known due to its long ears, which serve as a blood cooling system. Along with its light fine fur, it can withstand the high temperatures and extreme climate of the Sahara.

It’s the smallest canid in existence, measuring no more than 40 cm (16 in), and its tail is about 30 cm (12 in) long. The fennec fox uses its tail as a cushion when sleeping in its den during the hottest hours of the day.

It hunts at night and feeds on reptiles, rodents, birds, and eggs. It complements its diet with fruits and water that it obtains in oases.

3. Addax: an endangered animal from the Sahara

It’s called the “white antelope” – even if its body is also brown – and is another of the typical animals from the Sahara. It has the ability to live for almost a year without drinking water and eating only sparse vegetation. As such, in order to reduce energy expenditure and avoid the hottest hours, it remains inactive between sunrise and sunset.

The addax is a bovid with curved horns that lives in small herds organized in a certain hierarchy. Unfortunately, only a few of these groups remain in the wild. Several attempts have been made to conserve the species, which is critically endangered, but the effects will only be seen in the long run.

Its scientific name is Cerastes cerastes and it’s also called the desert-horned viper because it has two pointed protuberances on top of its head. Undoubtedly, this is its distinguishing trait. In addition, it has prominent eyes – larger in males – and can measure about 80 cm (31 in) in length (females are bigger).

The Saharan horned viper is another of the animals from the Sahara whose body mimics very well the local colors. So, the color of its skin can be yellow, pale gray, reddish, brown, pink and beige. It has dark spots on its back, its belly is white and its tail ends with a black tip.

Females mate primarily in April, and lay a maximum of 23 eggs in the sand or abandoned caves, which hatch after two months. The young are about 15 cm (6 in) long and are self-sufficient from the first moment.

The last of the Saharan animals on this list is another bovid that has adapted very well to the deserts of North Africa. It’s about 65 cm (24 in) tall and weighs no more than 20 kilos (44 lb).

This animal feeds on sparse vegetation and can spend its whole life without drinking water: it only needs the humidity of the plants it consumes. However, if it finds a source of fresh water, it takes advantage of it to cool itself.

Dorcas gazelles can reach speeds of up to 80 km/h (50 mi/h) when they feel threatened. In order to escape from predators it makes long, high jumps thanks to its thin but strong legs. Finally, the body of this mammal is brown, except for the belly, which is white, and it has short straight horns and long ears.

Wildlife Found in the Amazon
If there's one place that's rich in nature, it's definitely the Amazon. There's an abundance of wildlife found in the Amazon and we'll look a them today. Read more »
Link copied!
Interesting Articles
Wild Animals
5 Animals that Live in Grasslands