The male of the common midwife toad is a magnificent father, carrying the fertilized eggs between its hind legs until they complete their development. 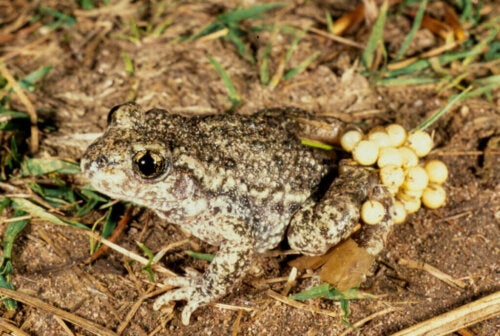 The small common midwife toad (Alytes obstetricans) doesn’t have a typical toad-like appearance, as it’s a small amphibian with warty skin and a robust body.

These amphibians can be distinguished by their bodies covered in red warts. Their pigmentation is very varied, from pale to brown tones. They also have spots on their throats and chests that can have many colors, including black, brown, olive, green, or grey.

Males are slightly smaller (42 millimeters in length) than females, which in adulthood reach approximately 55 millimeters (2 inches). Moreover, they have vertical slit-shaped pupils in their large eyes.

Distribution and habitat of the common midwife toad

This animal can be found in eight European countries: Portugal, Spain, France, Belgium, the Netherlands, Luxembourg, Germany and Switzerland, and has been introduced to the United Kingdom. To date, three European subspecies have been reported.

Thus, this species lives from the seashore, in Asturias and the Basque Country in Spain, for example, to 2,400 meters above sea level in the Pyrenees. In Central Europe, most populations live at altitudes between 200 and 700 meters (650-2300 feet) above sea level, rarely below 200 meters.

The common midwife toad prefers life on land, as it only lives in water when it’s a tadpole. These small amphibians often hide in holes or under logs to prevent their skin from drying. If an individual can’t find shelter, it digs its own burrow.

The common midwife toad usually comes out of its burrow at dusk and during rainfall to look for insects and arthropods. Adults may hibernate underground to protect themselves from frost during the winter months.

During the breeding season, the males make their courtship calls every night for several hours. Occasionally, you can hear the males calling from their burrows during the day.

It was reported that females tend to prefer males who call more frequently. Besides, females give a callback to the male of their choice, which is rare among other anurans. Competition between males during the breeding season is strictly vocal, as no direct aggression between individuals has been observed.

The exemplary paternity of the common midwife toad

The mating season varies between late March and early August. Females can lay up to four clutches of eggs per breeding season.

These amphibians are well-known for their parenting behavior. The males attach the egg rows of the female to their bodies. They then carry them on the back of their legs until they hatch. At this point, the males release the tadpoles into water.

When carrying the eggs, the common midwife toad can temporarily keep them out of water where they are in great danger of being eaten. Males can carry about 150 eggs around their ankles during the breeding season, which is about three clutches.

Males keep their eggs moist by choosing an adequate place and occasionally having a dip. After three to six weeks, the eggs hatch and the male deposits the tadpoles in a small body of water. When they hatch, the larvae measure approximately 15 millimeters, and after one year of life they go through the metamorphosis.

When threatened, the common midwife toads excrete a powerful smelly toxin from the warts on their backs, to defend themselves from predators. This toxin is highly effective and can be fatal.

Thus, in a matter of hours, the toxin can kill a snake. Tadpoles can’t produce this toxin and are vulnerable to predators during their development.

Habitat loss is the main factor in the decline of this species. Additionally, other changes that affect micro-climatic conditions (i.e. drainage of temporary water bodies) have a negative impact.

Furthermore, another possible reason for the decline of these amphibians is the increase in predators (natural or introduced) and the transmission of diseases. However, animal behavior experts reported that the common midwife toad can occupy habitats modified by humans, such as agricultural land and urban areas.

The Corroboree Frog: An Absolutely Fascinating Species
In this article, we're going to tell you all about the corroboree frog, an Australian species that's unfortunately critically endaged. Keep reading! Read more »

The corroboree frog is an iconic amphibian in Australia. The colorful patterns on their bodies, their venomous capabilities, and the…

The axolotl can be many different colors including black, gray, gold, albino, and white. They're relatively easy to take care of, but they live their whole lives in the water.…

Amphibians
The Marine Iguana: Ruler of the Galapagos

When we think of the Galapagos Islands, we usually think of two animals: the giant tortoise and the marine iguana.…

The bullfrog is an invasive species that lives in almost all parts of the world. Not only is its birthrate…

When you think of poisonous animals, the first ones that probably come into your head are snakes or spiders. However, there are also some frog species with this 'ability.' One…