Discover Panama and its 5 Most Common Bird Species

The conditions in this Central American country are responsible for the fact that it's home to no fewer than 2,000 different species, which have particularly striking physical features and colors. 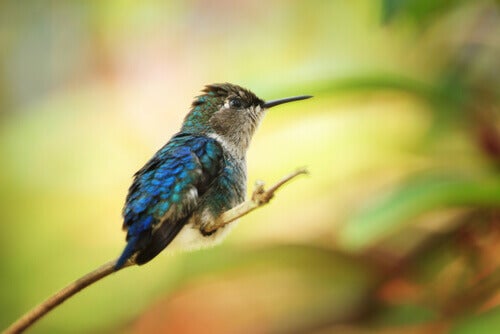 Panama, like all Central American countries, is characterized by the incredible nature and scenery found in every corner of its territory. And within this, we can find very special and incredible fauna and flora. In this article, we’ll explore this place’s most common bird species.

Experts estimate that there are around 2,000 different species of birds in Panama, which is a lot more than in most other countries. As you might expect, the country must have certain natural conditions that attract these animals to its lands. What are some of them?

All these characteristics make Panama an ideal place for birds to live in, which is why there are so many different and common bird species. Let’s take a look at some of them.

The most common bird species in Panama

Have you heard the phrase “as small as a hummingbird”?  Well, we’ve found an even smaller species: the bee hummingbird. Its size is similar to that of a bee (hence the name). However, the rest of its characteristics are very similar to those of a common hummingbird as far as colors and shapes are concerned.

This is the smallest species of bird in the world, measuring no more than 2.3 inches long and weighing about two grams. Its shape, somewhat more rounded than that of the common hummingbird, is what characterizes them the most. In addition, its iridescent colors (especially in males) are also worth noting as they’re so unique. Regarding its flight, this bird is capable of reaching speeds of 70 mph.

The locals call this bird “Bull’s blood”, but its scientific name is ramphocelus carbo. Its common name is based on the color of its plumage around its chest, which can be an intense red tone that stands out from the rest, which is jet black.

This beautiful bird is around 7 inches long and weighs around 25 grams. It has a harmonious blend of colors that stand out against the natural green of the country.

This is another bird that lives up to its name, as it’s totally blue (albeit with a gray tinge). However, its plumage alternates various shades of this color with different intensities. Its chest and head are light blue, which contrasts masterfully with the more intense blue color on its back and wings.

It’s about 7 inches long and weighs 35 grams. Experts estimate that there are between 13 and 15 subspecies of this bird, although all of them are easily recognizable as bluebirds. Who can deny how whimsical nature is?

These birds are common all over the country. In fact, surely if you visit while on vacation, you’ll be able to find or at least hear one in the distance.

Although there are several subspecies of the woodpecker, the most common one in Panama is black, with a red head. Most of them also have some white longitudinal lines in the head that go down to their neck. Yet another beauty to admire!

One of the most protected birds in the area due to its scarcity is the Quetzal. This bird is impressive, with its long tail, and very attractive colors. In fact, there’s even a place where they seem to live in groups and where you can enjoy a hiking trail to spot them.

It’s not possible to list all the species of birds you can find in the country, but these are the most characteristic ones. If you ever visit Panama, keep your eyes open and see if you can spot any of them!

Birds of Paradise: Species and Characteristics
In this article, we're going to tell you all about birds of paradise: their characteristics, some of the 41 subspecies, and how beautiful they are. Read on! Read more »
Link copied!
Interesting Articles
Birds
The Bali Myna: A Beautiful Critically Endangered Bird