How Many Species of Penguins Are There?

One thing the different species of penguins all have in common is that they live in the southern hemisphere, although not always in the areas covered by the ice and snow of Antarctica. 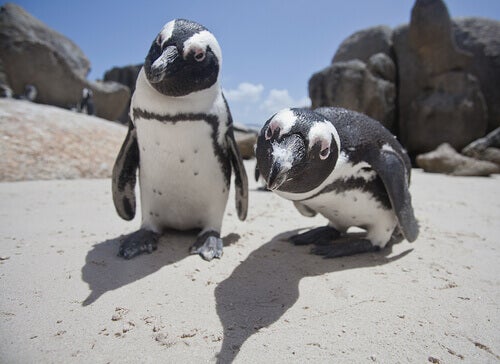 There are nearly 20 species of penguins, and in photographs we always seem to see them surrounded by snow. In this article, we’ll find out where the different penguin species live. You may be surprised to discover that not all of them live in snowy areas.

Common characteristics among the different species of penguins

Penguins are a marine family of flightless birds. That is, they live on the coast and spend part of their lives submerged in the sea, even though they nest on land. They don’t use their wings to fly, but they do help them to swim faster.

Biologists have counted 17 different species of penguins, and the size, weight, and color of their specimens vary greatly depending on the species. The largest is the emperor penguin (Aptenodytes forsteri), which is three feet tall and weighs almost 80 pounds. On the other hand, the smallest is the little penguin (Eudyptula minor), as its name indicates. It grows to weigh barely two pounds as an adult.

However, all these animals have the same diet: they’re carnivorous fishing birds. The size of the prey also depends on the size of the penguin that has to catch it, of course. But, in general, they feed on fish, squid, and shrimp.

The habitat of penguins

Penguins live entirely in the southern hemisphere, although not all of them live in Antarctica or in snowy areas. However, most penguin colonies are located around the southernmost continent of our planet.

Above Antarctica, these animals can also be found on the southern coasts of Australia, South Africa, Peru, Chile, and Argentina. Of course, there are also penguins in the sub-Antarctic islands. Outside the breeding seasons, they sometimes expand northwards, but always follow the cold currents.

The Adelie penguin (Pygoscelis adeliae) only lives in Antarctica and doesn’t usually leave its shores. The emperor penguin also lives in the same area. The king penguin (Aptenodytes patagonicus), however, can extend its habitat as far south as Australia and New Zealand.

The Humboldt penguin (Spheniscus humboldti) doesn’t live in the Antarctic region, as it extends along the Pacific coast of Chile and Peru. This area isn’t as cold, and, therefore, this bird lives on rocks and not in the snow.

The only exception to living in these southernmost regions are the Galapagos penguins (Spheniscus mendiculus), which live on the islands belonging to Ecuador. However, like all other species, they’re located in the southern hemisphere, even if only by a few kilometers.

Their diet depends on the sea

Penguins are very good divers and, in their evolution as a species, they’ve discarded their ability to fly in favor of reaching high speeds and precision underwater.

Their wings have become flippers to help them propel themselves. Their legs are further back than those of other birds, which makes them clumsy on land. However, they make up for that as they’re really good rudders!

Now we know that penguins live in the southern hemisphere. However, if we wonder about their specific habitat, we must bear in mind that most of their day is spent in the water. There are some species, in fact, that can go for weeks without returning to dry land.

Penguins group together in colonies to protect themselves from external threats. There are colonies of many different sizes. Some are made up of just hundreds of pairs, while others, such as the one recently discovered on the Danger Islands, have more than a million members.

Penguins pair up for life and, in breeding seasons, they take turns fishing. One of the two members of the pair stays behind to look after the nest, hatching eggs, or protecting the young. Meanwhile, the other goes foraging.

Not all species of penguins build nests. However, those that do place them far from the coast, on the mainland. Some build them on steep terrain, others on flat ground. It depends on the possibilities offered by the terrain, but always away from possible predators.

Penguins form a unique family of seabirds. Their habitat is restricted to the southern hemisphere, so if you want to do penguin-watching tourism you’ll most likely have to travel to areas close to Antarctica. Remember to be respectful of wild animals and the environment so that you don’t endanger them in any way.