How Many Turtle Dove Species Are There?

There are more than 15 turtle dove species, which are usually confused with pigeons. That's because it's hard to spot the difference. 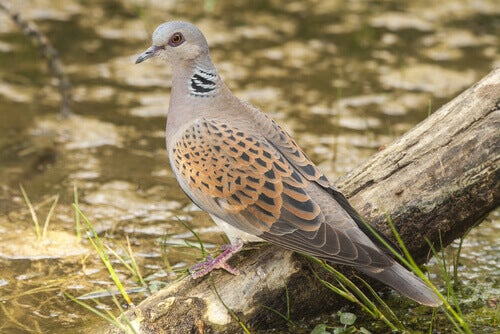 Turtle doves are direct relatives of pigeons and are quite similar to them. They live almost everywhere in the world, both in the country and in the city. In this article, we’ll tell you more about the different types of turtle dove species that exist.

In total, there are more than 15 species of turtle doves, which are frequently confused with pigeons. The differences between the two are almost unnoticeable. However, it’s believed that turtle doves have less robust bodies than pigeons. Here are some turtle dove species:

Its scientific name is Streptopelia turtur, and it’s the bird in the feature photo of this article. Despite its name, it doesn’t just live in Europe. They can also be found in Central Asia and North Africa. It’s a migratory bird that prefers urban areas, but it can also be found in wooded countryside.

This bird is known for the orange and black design on its feathers, which appear to be hand-painted. The rest of its body is gray, except for the black and white mark on its neck and its red eyes.

The European turtle dove measures less than 12 inches and doesn’t weigh more than 6 ounces. Its song is a monotonous monotone lullaby. Also, its nest is small and each year the female can lay eggs three times, laying up to two eggs each time.

This species’ scientific name is Streptopelia decaocto and it’s typical of Eurasia. However, it can also live in North and South America. It’s another medium-sized turtle dove that measures no more than 12.5 inches in length and weighs around 7 ounces.

This bird’s plumage is grayish beige with pink hues on its neck, chest, and head. In addition, it has black and white marks on its neck. Their beaks are blackish, their legs are reddish, and their eyes are dark red, but appear black from a distance.

The Turkish turtle dove is sedentary, has adapted to life in the city, raises its chicks in the trees— especially conifers— and can reproduce year-round. However, it’s most common for them to reproduce between March and October.

Humans have known about the roseogrisea streptopelia since ancient times. This species can mate with both the Turkish and the rosigris bird. They’re very docile and their voice is very soft. They produce their songs when the air in their lungs vibrates as it leaves their body.

This turtle dove is originally from Africa, but it also lives on the Arabian peninsula and in the Canary Islands. Also, its belly is paler than its wings. Overall, they’re completely white, but they do have a grayish-pink collar.

This turtle dove species is also called the laughing turtle dove because its call sounds like laughter. They mainly live in semi-arid deserts and scrub habitats of Africa, the Middle East and Central Asia. In addition, they eat on the ground: termites, beetles and seeds are part of its diet.

Its feathers are striking because they’re a mix of orange, brown, yellow, reddish, and gray. Also, they have distinctive patterns that help to differentiate it from other species of doves and pigeons. In addition, they’re about 10 inches tall and they have a long, thin tail.

They live in pairs or small groups and the male’s courtship includes a head bob, a coo and a wing ‘peck.’ Females lay two eggs at a time, in a fragile nest built from branches in low bushes.

The last of the turtle dove species on this list is known by different names and it inhabits South America, either in urban or open spaces. Also, they build nests in trees and females lay two eggs, which hatch after 14 days.

Males have light blue feathers on their heads and pink or gold feathers on their chests. On the other hand, females are completely dark in color. Both sexes sing, but males do it with more force and intonation. Females will do it before feeding their young.