Meet the Birds with the Largest Beaks

The size of this part of the bird's body, as well as its shape, is not merely a matter of aesthetics but will vary according to the animal's needs and environment. 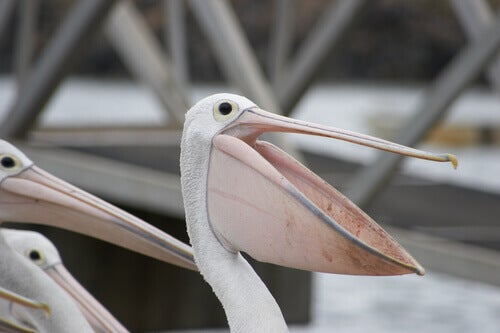 A bird’s beak reveals a lot about its lifestyle and the specific characteristics of the species. It’s undoubtedly one of their most distinctive features. In this article, we’ll be talking about the birds that have the largest beaks. Up next, meet the one with the largest beak in the world!

The Australian pelican, the king of all the largest beaks

Bird beaks play a vital role in their daily activity. Longer, shorter, curved, or thicker, it all depends on the animal’s needs.

It’s possible to know a little about the habits and lifestyle of a bird according to the type of beak it has. So, which bird species has the largest beak? The answer is the Australian pelican.

The Australian pelican or Goolayyalibee (this article’s featured image) is the animal with the largest beak in the world. This species is around 60–74 in long in total and its beak has an average length of 1.5 feet.

Pelicans’ beaks are one of the most important aspects of their anatomy. Their shape is essential for hunting and later storing food or fresh water in the pouch or gular sac, which is formed in the lower part of the beak.

Undoubtedly, one of the most distinctive characteristics of the toucan is its enormous beak. The toucan’s beak plays a vital role in its life, as it actually works as an effective temperature regulator. Moreover, it can absorb high temperatures by diverting heat away from the animal’s body, allowing it to cool itself. Cool or what?!

One of the most peculiar beaks in the animal world belongs to the bird Balaeniceps rex, better known as the shoebill stork. Originally from Africa, specifically Uganda, this bird feeds on frogs and fish found in stagnant waters.

The most distinctive and peculiar beaks

The Spoonbill is another bird with one of the largest beaks in the world, and a very peculiar one. People also know this bird as the pink spoonbill beak. It inhabits the humid areas of the United States, as well as South America. Its beak resembles the tongs we use to make a salad.

These small birds, which can be up to 6.7 inches long, have a very peculiar beak that intertwines instead of fitting the upper part to the lower part. Their beak’s particular and interesting shape allows them to extract seeds from pine cones.

As we’ve seen above, birds’ beaks have a purpose that goes beyond the aesthetic aspect, hence the variety of their shapes. In the case of pelicans, specifically the Australian pelican, its enormous beak is essential for feeding, preserving prey, or carrying freshwater.

Besides hunting, birds’ beaks are also used for regulating temperature, extracting seeds, peeling fruit, and even attracting mates. In many cases, they also serve as a defense mechanism for the animal.

Another particular way of using their beaks is as a tool for carrying different materials (for nest building, for example). Many birds’ beaks are suited for drilling hard surfaces, like dry wood, for instance. In addition, they can also be used as scissors for cutting some dry branches.

Another important issue for a bird’s daily hygiene is the control of its plumage. Using their beak, birds can deworm and organize their plumage for a better visual appearance and overall health.

In conclusion, the bird with the largest beak in the world is the Australian pelican. At 60 inches long, this bird species stands out above the rest thanks to this important part of its anatomy.

We hope you enjoyed learning about the birds with the largest beaks in the world! How many of them did you know? See you next time!

Interesting Facts About Woodpeckers
Today, we'll share some interesting facts about woodpeckers, which live in Europe, Central America and, above all, in South America. Read more »
Link copied!
Interesting Articles
Birds
Discover Panama and its 5 Most Common Bird Species

Birds
The Cunning Cuckoo and Its Relatives

Cuculids are birds that belong to the family Cuculidae, which includes the cunning cuckoo and its relatives. They're mostly tree-dwelling…