Curious Facts about the Narwhal: the Swimming Giant of the Arctic

The narwhal is a big cetacean that stands out for its enormous tusk that it uses for echolocation, to defend itself, to pierce ice, and to detect prey. Read on to learn more! 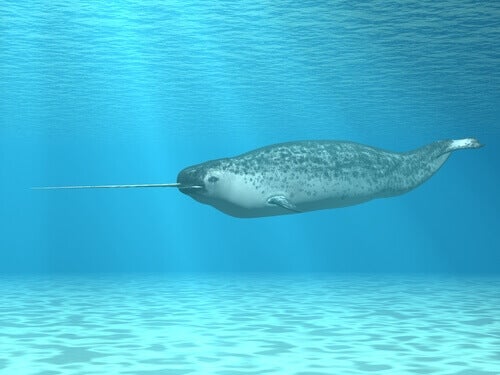 The narwhal is a cetacean that’s directly related to the beluga and that lives in the Arctic. Male specimens have a very long, helical-shaped tusk. In this article, we’ll share a few curious facts about the narwhal, a giant swimmer of the frozen oceans.

The characteristics and habitat of the narwhal

With a mottled gray body – which appears at two years of age and accentuates as it grows older – and a white belly, the narwhal is the only species in the genus Monodon. It can measure about 13 feet long and weigh about 3530 pounds (between 30 and 35% of its weight is fat). This animal can live about 50 years in the wild.

Sexual dimorphism is very marked in this species, not only because of the size and weight of the specimens, but also because the males have long, characteristic tusks that differentiate them from other cetaceans.

Similar to a horn, this canine “tooth” grows up to 10 feet long and has several uses. It allows the species to break holes in the ice, detect prey on the seabed, and defend itself. It’s an indicator of domination and status among other specimens. Experts believe that males with longer tusks will attract more females to mate.

The narwhal inhabits the Arctic waters north of Canada, Greenland, and Russia, around the ice blocks that form during the winter, fjords, and inlets. People usually see them in bays and the Hudson Strait, since it prefers the deep waters of the open sea.

This species changes its location according to the time of year. During the summer, it approaches the coast in herds of up to 100 specimens. When temperatures drop, it groups in small formations and moves away from coastal areas.

Reproduction, diet, and behavior of the narwhal

Regarding its reproduction, the narwhal reaches sexual maturity at seven and nine years of age in males and females, respectively. The mating season is in March and the calves are gestated for about 15 months. This is why they’re born, one at a time, between July and August of the following year with a weight of 176 pounds and a length of more than five feet.

The calves breastfeed for more than 12 months and the female is fertile again three years after giving birth.

While looking for food, narwhals emit certain pulsating sounds, since they rely on echolocation to detect and later chase their food. Their diet is based on cod (arctic and polar), squid, and halibut. As it’s a very restrictive diet, they go long weeks without eating.

Since it captures its prey on the seabed, this cetacean has to dive about 2600 feet. It can remain submerged for 30 minutes. Then, it must surface to breathe through the hole in the top of its head (blow-hole), like dolphins or whales.

Another interesting fact about the narwhal is that it can make many different sounds, depending on the occasion. In addition to the clicks the narwhal makes while hunting, it also interacts with its companions at different frequencies and tones. These animals do so to communicate with each other.

It’s worth noting that this animal is surrounded by many legends and myths, and the commercialization of its tusk contributed to the story of the magical unicorn.

Also, during the reign of Queen Elizabeth I, people believed that the material of the tusk neutralized poison. For this reason, the monarch ordered a cup to be made of this material with encrusted jewels. It was outrageously expensive and was the one she always used.

5 Species of Whale, the Giants of the Ocean
They inhabit most of the world's oceans, but some species of whale are in danger of extinction due to hunting. Meet some of them here. Read more »
Link copied!
Interesting Articles
Wild Animals
5 Animals that Live in Grasslands