Thanks to the use of seismographs, small earthquakes caused by stampeding animals fleeing poachers could reveal that they're under attack. 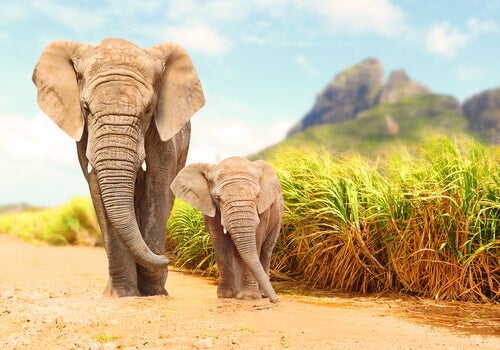 Protecting elephants is one of the priorities in the defense of African wildlife: these giant animals are rapidly disappearing because of ivory poaching and trafficking. Scientists think detecting earth tremors to protect elephants could be a real help.

Why is the African elephant endangered?

The African elephant has been hunted for centuries, and it’s vitally important to protect it. Ancient peoples used them as war machines and hunted them for their tusks, but it wasn’t until the 19th century that hunting them became a massive industry.

The use of firearms and the development of hunting as a leisure activity turned the elephant into one of the most coveted animals for poachers. Europeans and Americans were willing to pay large sums for their tusks.

In 1989, elephant hunting and ivory trafficking were banned, after the destruction of hundreds of thousands of elephants had already wiped out half of its population.

Scientists at the time even predicted that the elephant would become extinct by 1995 were it not for this measure. However, poaching continues because ivory horns have become very valuable on the black market.

Fortunately, both African and Western societies increasingly frown on elephant hunting. The countries where these animals live impose fines of up to $12,000; this is a huge figure for many poachers, and authorities also withdraw their hunting licenses.

Elephants are the largest land animal in the world; they weigh about six tons, although there are records of specimens weighing up to 10 tons. They’re very intelligent animals with a rich emotional life; they understand the concept of death and they have their own animal culture.

In fact, the legend of elephant graveyards is quite real. Elephants wear down their teeth until they’re about 50 years old; when they can no longer eat or drink and thus look for a place to die.

Later, when new generations and former relatives of these animals find the skeletons, the elephants perform ceremonies in which they touch the bones of their relatives for a long time.

Elephants and their understanding of tremors

But now scientists have found a new way to protect them: detecting earth tremors could help preserve African elephants. They generate small, detectable earth tremors when they walk.

Several British universities have been studying the tremors that these animals produce when they walk. They believe that these are of vital importance for their communication, and could even help protect the elephants.

The researchers have discovered that the sounds and calls of elephant herds are transmitted through the ground, even faster than through the air.

The team of scientists only intended to measure how far these vibrations reach. However, they ended up finding out that it was relatively easy to discern between them. They learned that they could infer the different behaviors the elephants were engaging in, and how they were influenced by terrain or human activities.

How can we use this information to protect elephants?

The scientists also found that human activities interfere with this communication, but that it’s possible to know when elephants are being chased.

One of the proposals of the study was to use seismic detectors to help the elephants. The researchers suggested using seismographs to monitor elephants in order to detect when they’re under attack. Seismographs can detect their movement from miles away without disturbing them.

For example, these detectors could analyze stampedes, which would be especially useful for interfering with poachers’ attacks on these impressive animals.

5 Species in Critical Danger of Extinction
Many animals are in danger of extinction, as their populations have decreased by 80-90% and less than 250 adult specimens remain. Read more »
Link copied!
Interesting Articles
Wild Animals
5 Animals that Live in Grasslands