The Rainbow Trout, a Multicolored Salmonidae

Within the salmonid family, there's a very interesting species known as the rainbow trout. This fish is present in almost all the waters of the world. 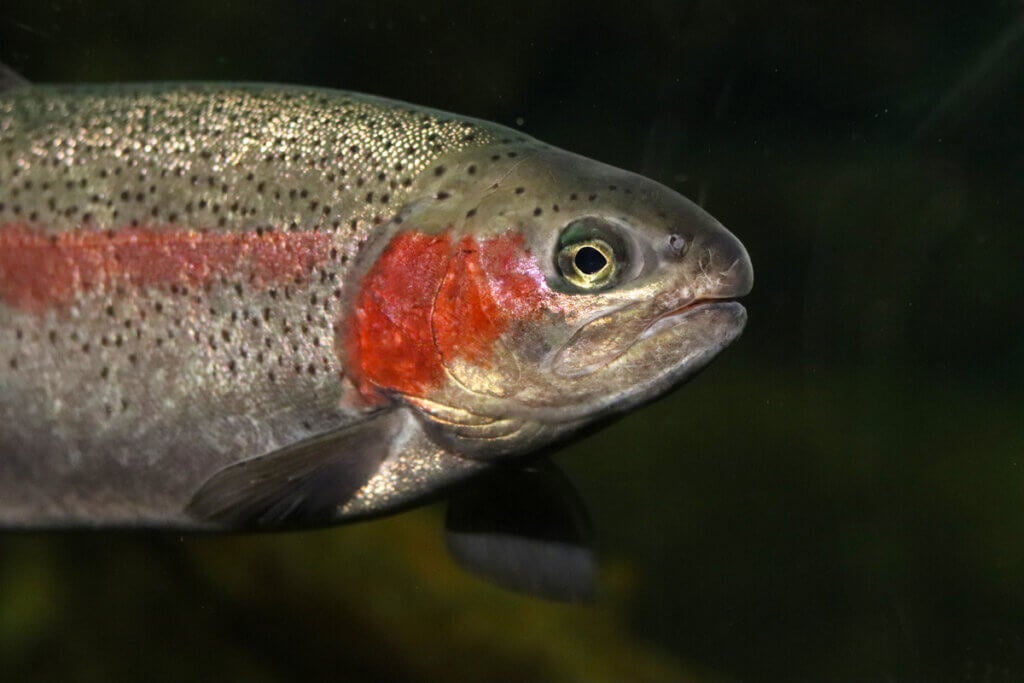 The rainbow trout is a multicolored Salmonidae spread throughout practically all the waters of the world. Its common name comes from the shades that appear on its body.

Do you know what the characteristics of this beautiful animal are? Are you aware of the dangers it faces in terms of conservation? If you want to know more about this unique fish, we encourage you to read on.

Characteristics of the rainbow trout

The rainbow trout’s scientific name is Oncorhynchus mykiss and it’s a freshwater fish native to North America. This species belongs to the family Salmonidae, whose members are commonly called salmonids.

This species reaches a length of 20 to 30 inches and weighs about 18 lbs. However, a maximum size of 4 feet in length has been recorded in an individual weighing 50 lbs and of 11 years of age.

Normally, in the belly area, the color is silver or whitish and is also flanked by a lateral line of iridescent pink. At the same time, in the dorsal region of the body, the predominant color varies from blue to green.

The colors on its body are the reason why we know this fish as the rainbow trout. What’s more, the tones of its body vary according to the habitat, age, and reproduction.

With respect to the habitat, the body of lake-dwelling trouts is more silvery and shiny. On the other hand, those that reside in rivers have a darker and more intense color.

Another factor that can affect the body tone is diet. Experts have observed that the characteristic salmon color of the wild species comes from the intake of mollusks and crustaceans.

In addition, we can observe a certain sexual dimorphism among the males and females of this species. While females show a bulging belly, the lower jaw of males is more pronounced and their lateral line is brighter.

In the Iberian Peninsula, the rainbow trout is located in the Northern and Eastern regions, including Galicia, Asturias, and Cantabria. What’s more, there are also records of the presence of specimens in Mallorca. At the same time, there are no records of their presence in the Basque Country.

With respect to the rest of the world, this species comes from North America and lives in different rivers on the Pacific side. More specifically, they start in Alaska and their journey ends in lower parts of California. However, they may even go as far as Mexico.

The rainbow trout usually live in areas of fresh, transparent, cold water, such as rivers, lakes, or streams. The water must be clear and preferably at a temperature of around 54ºF. As for the current, this fish leans towards rivers with fast or moderate currents. However, on some occasions, it can leave the freshwaters and reach the sea.

Being a generalist predatory species, its diet can vary. Among the foods that this species consumes, the larvae of invertebrates, crustaceans, and mollusks stand out the most. Observations also reveal that they may also eat small fish. With respect to younger members, they feed mainly on zooplankton.

Humans have introduced this species artificially in practically the whole world. In Spain, it only lives in regions where reintroduction has taken place for sportfishing or for its cultivation in fish farms.

Rainbow trouts are present in the waters of every continent except Antarctica. Although fish farms cultivate this species for gastronomic consumption, the main reason for its reintroduction has been recreational.

For these reasons, the rainbow trout is considered the most cultivated in the world. This is due to aspects such as its resistance or ease of breeding, in regard to both feeding and adaptability.

With respect to its conservation in Spain, it’s an allochthonous species that represents a threat to the rest of the native species. In the rest of Europe, it’s also a species that humans have introduced.

The main threat is that the rainbow trout is a predatory species. Its presence influences the populations of amphibians and invertebrates, as well as other native fish species. As for its own classification, because of its widespread introduction, the rainbow trout isn’t considered to be endangered.

As we’ve seen, the rainbow trout is a very adventurous relative of the salmon that can be found in rivers or in the sea. It isn’t an endangered species and is appreciated both in sportfishing and in gastronomy.

The Current Situation of Freshwater Fish in Spain
The vast majority of freshwater fish In Spain are endangered due to pollution and the introduction of non-native predators. Read on! Read more »
Link copied!
Interesting Articles
Fish
Description and Purpose of the Swim Bladder in Fish