Mantis Shrimp are aggressive crustaceans that live in dens. While they prefer to ambush prey that come near their lairs, they occasionally venture out to hunt. 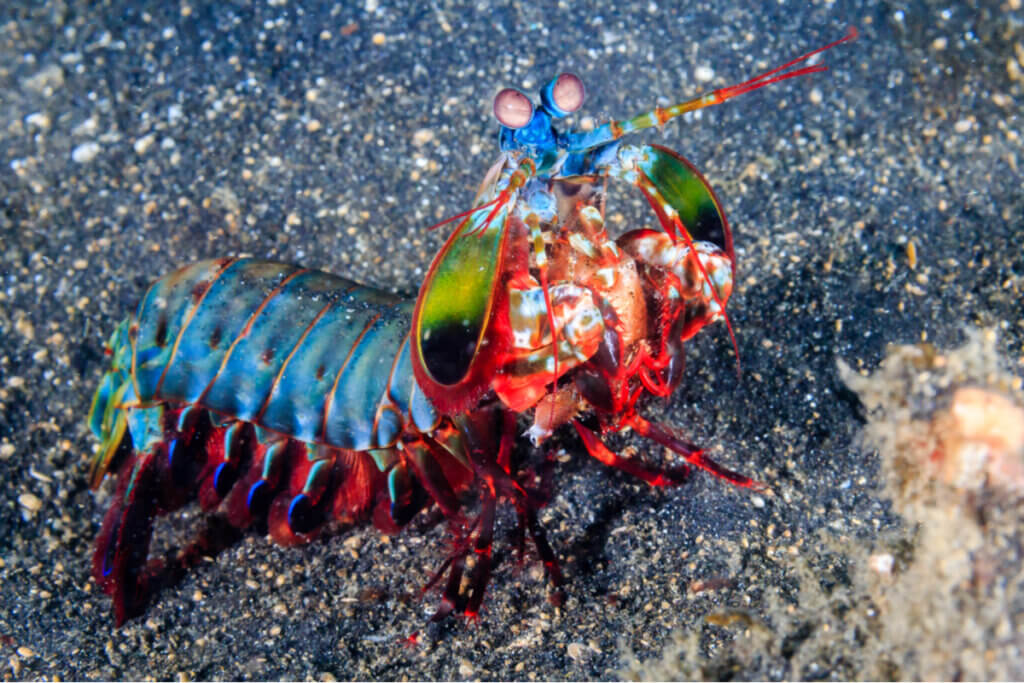 Shrimp come in a variety of sizes, varying between 5 and 16 inches, approximately. And when it comes to their coloration, they also vary from brown to bolder and even fluorescent colors. One of the more eye-catching varieties is the mantis shrimp.

These invertebrate crustaceans belong to the Stomatopoda order, which includes some 400 different mantis shrimp species. All of these species also belong to the suborder Unipeltata. In general, we refer to them by a variety of names: Sea locusts, prawn killers, and even thumb splitters.

Ready for a fight

Mantis shrimp are aggressive predator animals that possess powerful claws. We’re referring to a pair of modified thoracic appendages in the shape of forceps, similar to those of the praying mantis. According to the shape of these claws, there are two different groups:

Thanks to their speed and ferociousness, both types of mantises are able to overcome prey that’s much larger than themselves. In fact, there are reports of mantises capturing prey eight times their own size.

The science behind the punch

Without a doubt, the key to the punch of these crustaceans is speed, as being fast underwater is an elaborate process. To achieve it, besides normal muscles, their arms contain special structures that allow them to quickly store and release energy through brutal blows. Their appendages possess a sort of muscular spring.

The blunt blows of these shrimp species can measure up to a speed of 75 feet per second (about 50 mph).

The appendage that carries the club in mantis shrimps possesses an elastic structure in the shape of a saddle. This structure compresses and shoots thanks to the simultaneous contraction of the extensor and flexor muscles. At just the right moment, it releases the latch by relaxing the flexor muscles, which allows the outward movement of the club.

If the prey doesn’t die from the blow, it will die of fright

Scientists have determined that, thanks to the speed of the blow, the attacker produces cavitation bubbles. It’s interesting to note that cavitation is a hydrodynamic effect that produces bubbles when a liquid is subjected to forces that respond to pressure differences.

So, the resulting bubbles travel to areas of greater pressure and implode. In other words, the vapor returns to its liquid state suddenly and the bubbles burst abruptly. Therefore, it releases a great deal of energy that can crack any surface upon impact. This phenomenon usually involves noise and vibration as well.

If the blow is so powerful, why doesn’t the shrimp break its club?

So, their great resistance to impact is thanks to what’s called the Bouligand Structure. This is similar to an outer layer of plywood. In short, the claws of these crustaceans possess two layers:

It’s worth noting that most mantis shrimp aren’t smashers, but rather spearers. Each type possesses different hunting styles, which we’ll show you below.

Spearers hunt by leaving their dens and searching for sedentary prey with hard shells. They then hit them in order to expose their soft and flavorful interior. Additionally, spearers trap fish, shrimp, and even shark offspring.

On the other hand, smashers are more prone to ambush their prey. Most often, they trap their prey by hiding silently in their den until an animal comes within reach. They use their ability to attack snails, mollusks, oysters, and crabs.

As you can see, the world of mantis shrimp is much more intricate than many could imagine. Just the same, one thing is clear. It’s best to stay away from this animal when it’s ready to attack its prey or you may end up with a broken bone.

Lithoredo Abatanica: The Mollusk that Can Change the Course of Rivers
Lithoredo abatanica is an unusual mollusk with a very special diet. These animals consume limestone rock, and excrete it as sandstone. Read more »
Link copied!
Interesting Articles
Invertebrates
The Secrets Behind How Worms Communicate