Konrad Lorenz and the Study of Animal Behavior

Scientist Konrad Zacharias Lorenz was an Austrian zoologist, his exceptional study of animal behavior earned him the Nobel Prize in Physiology or Medicine in 1973. 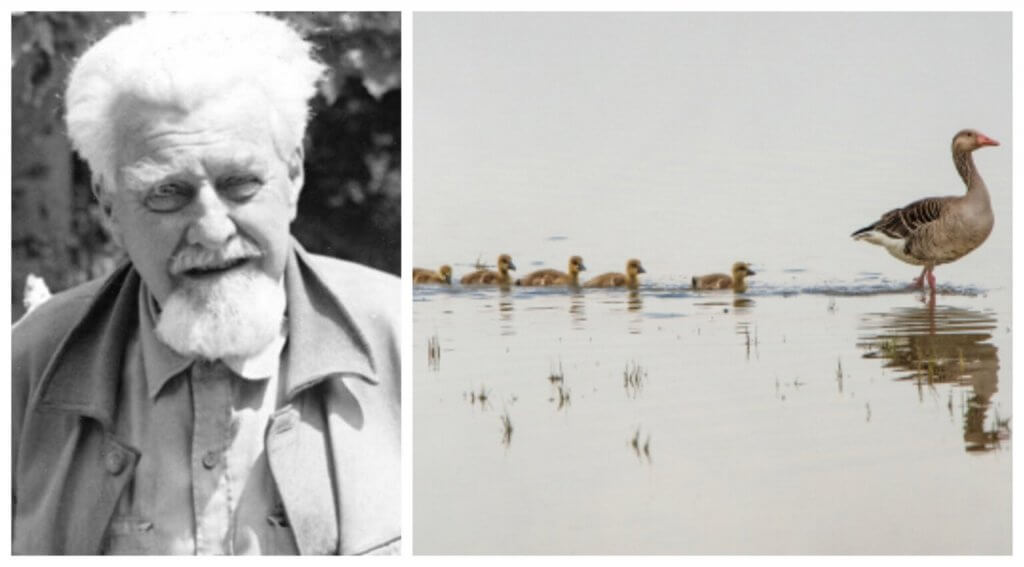 Many scientists regard Austrian zoologist Konrad Lorenz as the founder of modern ethology. Moreover, this scientist was a pioneer in the study of animal behavior using comparative zoological methods.

His ideas helped us understand how behavioral patterns can be traced back to an evolutionary past. In addition, he was known for his work on the roots of aggressive behavior in humans.

He shared the Nobel Prize in Physiology or Medicine in 1973 with animal behavior specialists Karl von Frisch and Nikolaas Tinbergen.

Konrad Zacharias Lorenz was born on November 7, 1903. He grew up in Vienna, Austria and also lived in the family’s summer estate in Altenberg, a village by the Danube River.

He was the youngest son of Adolf Lorenz, a successful orthopedic surgeon, and Emma Lecher Lorenz, a physician. In addition, from an early age, Konrad liked to be around animals and observe them.

Lorenz completed his studies at one of Vienna’s finest high schools. His childhood friend, Margaret Gebhardt, was also interested in animals. Eventually, in 1939, they married, and they had two daughters and a son.

The young Lorenz graduated from the University of Vienna as a Doctor of Medicine (MD) in 1928 and was appointed assistant professor at the Institute of Anatomy until 1935. He also began studying zoology, an area where he received a doctorate in 1933, from the same university.

From the observations Lorenz performed between 1935 and 1938, he created the concept “imprint”. The imprint is the process by which a calf – in its first moments of life – follows an object, usually its biological mother.

He developed this concept through bird watching (especially geese and western jackdaws). Therefore, during the process, he discovered that for a short time after hatching, the chicks’ genetics are prone to identify the sound and appearance of their mother. Because of this, hatchlings form a permanent bond with their mothers since the very start.

In 1940, he was appointed professor of psychology at the University of Konigsberg. However, World War II (1939–1945) soon interrupted his academic career.

The times of war

During the war, Konrad Lorenz served as a physician in the German army. However, the Soviet Union captured him in 1942 and he became a prisoner of war for six years.

From 1961 to 1973, he served as director of the Max Planck Institute for Behavioral Physiology in Seewiesen. In addition, in the year 1973 (the year he won the Nobel Prize) Lorenz became director of the Department of Animal Sociology at the Institute of Comparative Ethology in the Austrian Academy of Sciences in Altenberg.

In the latter part of his career, Lorenz applied his ideas to the study of animal behavior in humans as members of a social species. In addition, the scientist’s ideas constituted a hypothesis with highly controversial philosophical and sociological implications.

Lorenz went as far as to argue that struggle and war behavior in humanity has an innate basis. These ideas certainly created controversy. Lorenz explained that we can modify this behavior using a number of factors to alter our ecology in a more harmonious and natural way.

Ecology is the branch of biology that deals with the relations of organisms to one another and to their physical surroundings. Using this concept, Lorenz oriented his ideas regarding human behavior and especially aggressiveness with some of the following theories:

“A completely new ecology which corresponds in every way to humanity’s desires… could, theoretically, prove as durable as that which would have existed without his intervention. However, the principle of competition, typical of Western societies, destroys any chance of this. The pace of human ecology is determined by the progress of man’s technology.”

In short, Lorenz’s study of animal behavior paved the way to a modern scientific understanding of how patterns of behavior evolve in a species. He particularly emphasized the importance of the role of ecological factors and the adaptive value of behavior for the survival of the species.

His work pioneered the conceptual idea that animal species are genetically disposed to learn specific types of information. He also stated that this information is important for the survival of the species. This includes behavioral patterns we can observe in nature and ourselves.

Interesting Facts About the Behavior of Wild Elephants
Every animal species displays differed characteristics when they're in a favorable environment.Today we'll look at the behavior of wild elephants. Read more »
Link copied!
Interesting Articles
Invertebrates
Discover How Worms Reproduce