Meet the extraordinary Brazilian porcupine, a species threatened by the destruction of its natural habitat. 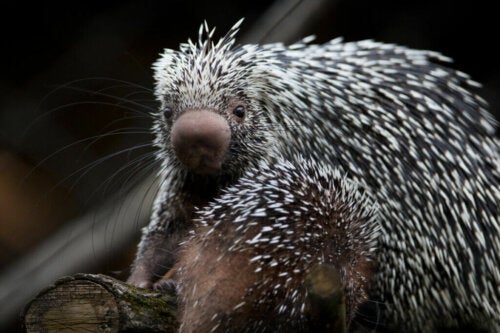 The porcupine is one of the most peculiar animals in the rodent family, characterized by a body covered in spines. However, it’s not related to hedgehogs or spiny anteaters. Porcupines can be found in Europe, Africa, India and America. Some live on the ground in meadows, deserts and forests, and others are arboreal and spend their lives on vines and branches. Today we’ll be focusing in on the Brazilian porcupine.

A body covered by spines

The most typical thing of the porcupine is its spines. A single specimen can have more than 30,000 spines covering its body, and each one of them can reach more than 30 centimeters (12 inches) in length.

The spines are modified hairs inserted into the animal’s musculature. Depending on the genus, these are embedded in clusters or interspersed with hair.

The different species of porcupines can be distinguished by their spines. These are kept horizontally while the animal doesn’t feel threatened. When the porcupine feels in danger, its thousands of spines bristle as a dissuasive message for the threat.

The spines can be released upon contact, or shed off when the porcupine shakes his body, but aren’t fired at potential attackers.

A spine can easily end up piercing the skin of another attacking animal or of a human, but it’s not so easy to remove. Each one of the spines has, on its tip, microscopic barbs oriented backwards, which reduce the penetration force, but maximize the time inserted in the skin.

The Brazilian porcupine is a great climber

Arboreal species inhabit the American continent, and are great climbers spending most of their time in trees.

Coendou genus enshrines porcupines that inhabit the Amazon area. Coendou prehensilis is the arboreal or Brazilian porcupine. Its name refers to its prehensile tail, which facilitates climbing.

It’s a nocturnal and solitary animal, only interacting with others of its kind during breeding season or in intra-specific struggles. In fact, these animals emit olfactory signals to warn potential competitors of their presence, and the noise of their colliding spines is also used as an intimidating signal.

During the day, they rest at about six meters (20 feet) high in the trees. During the night, they become more active and seek food. Their diet is mainly herbivorous based on tender leaves, stems, fruit, flowers, roots and bark.

How do we differentiate it from other porcupines?

The Brazilian porcupine is a medium-sized species, about 55 centimeters (21 inches) long. It’s fully coated with long, tricolor spines with a white base and tip, and brown middle. The spines are larger on the top of its back, and decrease in size towards the tail.

Its head is round with a prominent pink nose and lips. Its ears are small and hidden between the spines on the head. The tail has no spines, is prehensile and almost the same length as the rest of the body.

The Brazilian porcupine isn’t the only climbing species of the American continent. Out of the 16 arboreal species, 15 have a prehensile tail. The one species that lacks such a tail, has developed a very unique mechanism to avoid hurting itself in its own spines when falling from trees.

The spines of the American porcupine contain a topical antibiotic, so even if they hurt themselves, it doesn’t cause a reaction. The attack of one of these animals can be quite painful. Its effectiveness is so great that Africa’s great felines think twice before targeting a porcupine as prey.

Lions don’t usually incorporate these animals into their diet, unless resources are scarce during times of drought. Even so, this can result in serious injury for the feline.

The porcupine threatened in America

The destruction of the Brazilian porcupine’s habitat is the main cause of its decline, as the species is currently under threat. Deforestation of its habitat fragments the populations in the Amazon basin, which causes the inbreeding of many species of the genus.

Learn about the Different Species of Armadillo
The bony-plated species of armadillo is native to Central and South America, but can be found as far north as Missouri and Illinois. Read more »
Link copied!
Interesting Articles
Mammals
Pikas or Whistle Rabbits: Habitat and Characteristics