The lioness will care for its cubs until they're about 2 or 3 years old. Then, the mother enters heat again, and the pride of lions drives away male cubs. 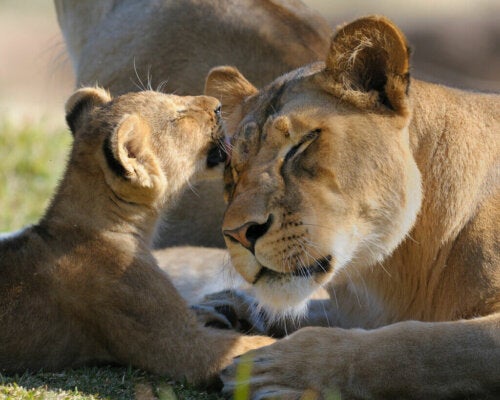 Nowadays, the survival of big cats is a huge challenge due to habitat destruction, poaching, and climate change. Fortunately, nature has provided lionesses with the intelligence, versatility, and maternal instinct necessary to create strategies for protecting their cubs.

There are few animals more devoted to their offspring than lionesses. As a born predator, this is a dedicated, courageous mammal with unusual perseverance. If you want to know more about lionesses’ behavior in the wild, read on.

In the wild, a lioness in heat may mate with different males from the pride. As surprising as it may seem, it’s common for it to reproduce between 20 and 40 times on average. This may be the earliest strategy to protect its cubs: mating with multiple males.

The second strategy of the lionesses is to time their pregnancies together. This favors raising the cubs together, and improves the chances of the offspring’s survival.

Lionesses hide their cubs for the first two months

Around birth time, lionesses look for a den far from the pride to hide their cubs. Usually, the litter can have up to 4 young.

It’s remarkable how helpless the cubs are in the first days of life: they’re blind until 3-11 days old. Thanks to their intelligent maternal instinct, lionesses introduce them to the pride only when they’re about 8 weeks old. While in hiding, lionesses will change dens every two weeks.

During this period, the predators that kill most cubs are hyenas, jackals, elephants, and buffalo.

Lionesses are exclusively dedicated to raising their cubs

The average gestation period of a lioness is between 105 and 110 days. During postpartum, females aren’t usually willing to mate until their cubs grow up and become independent.

For this reason, the period between births can extend up to 3 years when lionesses live in their natural environment. In captivity, the time can be reduced to 1 year. Nursing cubs lasts for approximately 8 months.

Cubs nursery is key for the working lioness

As mentioned above, females from the same pride give birth to their cubs at approximately the same time. This promotes the creation of a communal network for the care, protection, and feeding of offspring.

In fact, thanks to this arrangement, lionesses from the same pride will often nurse another’s cubs. However, if the age difference between cubs exceeds 3 months, the nursing lioness won’t accept younger cubs.

Behavioral researchers believe this is due to the communitarian nature of nursing. Older, stronger cubs will consume more milk, leaving younger cubs to starve to death.

Lionesses’ devotion may be worthless as most cubs don’t survive

The harsh conditions of the wild mean that 40% to 80 % of the cubs die in their first year of life. The two main reasons are food shortage and invaders’ attacks.

Commonly, invaders are male lions expelled from another pride that are looking for females. When they find a pride, they must first fight the existing males. If they win, the coalition of invaders will kill the cubs.

According to experts, killing cubs seeks to make females available quicker, and to ensure the transmission of genes of the attacking males. Lionesses, however, will fight to the death to protect their cubs. It’s common for mothers to defend themselves in groups.

Among African lions, infanticide is practiced by invading males who seek to obtain temporary but exclusive mating rights over a group of females.

This study highlights behavioral plasticity at an ethological level in the same species living in regions with different resource availability. After all, the aim is to maintain a balance between genetic variability and infant mortality.

As seen, lionesses are some of the most dedicated mothers in the entire animal kingdom. Without a doubt, nature never ceases to surprise us as some of their behavior is even more sophisticated than those of humans themselves.

The Masai Mara National Reserve of Kenya
Kenya's Masai Mara Natural Park was founded in 1961 and has an area of nearly 940 square miles. It's home to a wide variety of mammals. Read more »
Link copied!
Interesting Articles
Mammals
Meet The American Black Bear: Characteristics and Habitat