Some Snakes Are Good Mothers

It was always believed that these reptiles aren't very careful with their offspring; that after the eggs hatched the mothers simply abandon their young to their fate. Nothing could be further from the truth, as a new study reveals. Ophidians such as pythons do have a maternal instinct, as we’ll see here. 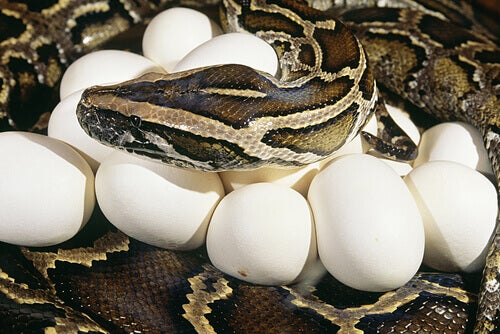 Motherhood is a very important connection for various species of the animal kingdom. However, there are animals that don’t feel this bond, and the mothers seem to neglect their young. But some snakes have been found to be good mothers, such as pythons.

Most snakes and other reptiles are thought to not care much for their young, although a new study indicates otherwise.

It was always thought that pythons and other species of ophidians are very tough on their young. They seemed to provide the bare minimum of care after the eggs hatch. But a team of scientists has discovered that some snakes are good mothers – the first time this has been observed in an oviparous snake.

The snake in question is the South African python (Python natalensis). Like other pythonids, it’s a constricting snake, which means it kills its prey by squeezing it until it drowns, rather than with a venomous bite.

These snakes usually measure about 16 feet, although they can reach 23 feet and there have even been reports of pythons up to 32 feet long. Such a snake could weigh up to 450 pounds, making it one of the largest snakes in the world.

The discovery that snakes are good mothers

The discovery was made by Graham Alexander, a researcher at a South African university. According to Alexander, his research is the first record of maternal care in oviparous ophidia, and gives new insights into the enigmatic behavior of snakes.

The research team published their findings after seven years of work, and what they observed is that female South African pythons take care of their young for two weeks after the eggs hatch.

Although this may seem like a very short time, many other reptiles – especially snakes – don’t take care of their offspring at all. The young are born capable of eating on their own, and it’s quite common for them never to know their mother, as is the case with some sea turtles.

The pythons’ care consists of the mother staying with her hatchlings for about 15 days. During that time she’ll observe their first movements and, more importantly, help keep them warm at night. This is because, at first, they can’t regulate their temperature well.

The research followed 37 pythons, eight of which laid their eggs in the cave of another species known as the aardvark, which was unknown to them. Thanks to radio transmitters, the team was able to observe new and complex python behavior. As a result, they learned that snakes can be good mothers when needed.

Motherhood in pythons: a risky activity

In fact, for some snakes being a good mother is a big risk. This species loses 40% of its weight during each breeding cycle, which can be up to 6 months long.

Its skin darkens so as to better absorb warmth from the sun’s rays and use it to warm the eggs and later the young. As a result, its temperature can reach 105 degrees; this is enough to be deadly for them if it goes on for too long.

Most snakes can speed up their metabolism to warm up their eggs and young, but this is not the case with the South African python. Actually, these animals have to spend the afternoon absorbing the sun’s rays near the burrow; this is so that the young can get enough warmth to resist the cold night.

This tough breeding process means that many mothers don’t breed again for several years, and some may even die or become infertile during the process. It seems that some snakes are good mothers, even to the point of sacrificing their own life for their offspring.

Snakes in Ancient Cultures
While many people are afraid of snakes, these animals were actually revered in the past. We'll tell you about snakes in ancient cultures. Read more »