Pallas’s cat is a solitary and shy animal, and is rarely seen in its habitat. It prefers rocky and secluded areas in the mountains of Central Asia. 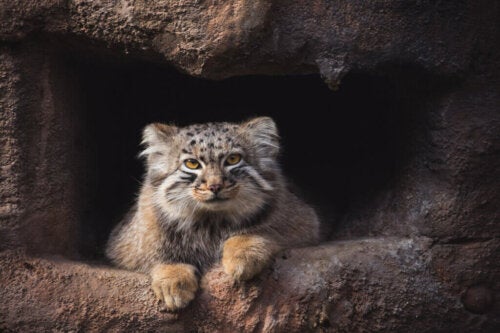 Pallas’s cat (Felis manul or Otocolobus manul), also known as manul, is a small wild feline from Central Asia. It’s interesting to know that its common name came from the name of the person who first described it, the German zoologist Peter Simon Pallas.

This feline has the size of a domestic cat and has beautiful and highly sought fur. Moreover, its round pupils, similar to those of large felines, is one of its distinctive traits. Also, this species has short legs, flat face and wide ears, with which it creates some of the funniest facial expressions in the feline kingdom.

Where does Pallas’s cat live?

Although Pallas’s cat is found throughout Central Asia, its habitat is very specific. This feline is adapted to cold and arid environments and occupies steppes, alpine deserts and rocky areas. Thus, this species inhabits the plains of countries such as Mongolia, Russia, Pakistan, Western China, Siberia and Tibet. It can also be found in northern Iran and India.

It inhabits caverns, cracks or burrows excavated by other animals, at altitudes of between 4000 and 5000 meters (13000 -16000 feet) above sea level, but only in areas where deep snow doesn’t accumulate. Very rarely it’s been seen in lowland areas.

The fur of the Pallas’s cat: its protection, beauty and curse

The beauty of this cat comes mainly from its very thick fur. Thanks to its fur, it can protect itself from the cold frosts of its habitat. Its hair shows significant color variations that change according to location and season, which helps it go unnoticed in its habitat.

Thus, the tonality of its fur varies depending on the time of the year, as it’s much more whitish in winter, and more grayish when there’s no snow on the rocks. Therefore, its fur varies from ash gray to ocher tones in various regions.

This variation convinced some scientists to suggest a classification into two subspecies. The definition of this subdivision requires new investigation. These subspecies would be:

The fur pattern of Pallas’s cat

It has whitish fur on its cheeks. This contrasts with the black spots on its forehead and the two fine dark lines starting from the corner of its eyes and crossing its face. It also has dark rings around its eyes and black spots on the top of its head and forehead. The mouth, chin, and neck are white with a slightly reddish tint near the upper lip.

The legs and torso display five to seven narrow black stripes that cross its lower back transversely. These dark stripes can’t always be seen at a glance due to the high density of their fur.

Moreover, its long, hairy tail has a black tip and beautiful black rings throughout. Its belly fur is almost twice as long as that on its back, and it serves as protection from the cold when lying down.

Perhaps the most typical thing about the animal is its big flattened head. Its ears are small, with an extremely low insertion. Its snout is shorter than in domestic cats, to the point that it has fewer teeth than other cats.

This wild cat is a solitary nocturnal animal, but it can also be active at dusk and early in the morning. According to experts, it usually sleeps in rock crevices and small caves during the day. They often take shelter in the burrows of other small animals such as groundhogs, foxes and badgers.

Scientists noticed their extraordinary ability to hide in their own habitat. Its stripes and pigmentation allow it to easily blend in with the surroundings. This camouflage ability is useful for hunting, as Pallas’s cats are poor runners.

If threatened, this feline doesn’t usually spit or whistle, as it yelps and growls when frightened. The sound has been described more as the howl of a small dog than the meow of a domestic cat. According to experts, this feline can purr similarly to a domestic cat.

Few of these animals have been kept in captivity, but those who have, tend to be aggressive and daring with humans.

What prey does Pallas’s cat prefer?

Throughout its habitat range, this feline feeds mainly on small mammals known as pikas and other small rodents. As a predatory species, its role is beneficial to humans, because pikas are considered agricultural pests.

This cat is an expert in stalking and ambushing these animals on the rocky steppes where it lives. It’s also known to occasionally eat small insectivorous birds.

The illegal trading of the Pallas’s cat

There are historical records showing that the trading of this feline’s fur began in 1965, with an average of more than 50,000 skins per year until 1985. It should be noted that the fur of the Pallas’s cat isn’t currently considered high-quality fur, and therefore has low prices compared to the snow leopard, the lynx and other species of wildcats.

It should be noted that Pallas’s cat conservation status is little known due to the lack of information regarding its numbers. It was widely hunted until the 1980s.

Even if hunting no longer seems to be a problem for this feline, the small rodents and pikas it feeds on are poisoned in some parts of Russia and China because they are considered carriers of disease.

It’s currently unclear what the greatest threat to this species is: the exposure to poison or the decrease in its food supply. Additionally, in spite of the laws that protect it, we can still find poaching due to its beautiful grey fur.

Finally, attempts for captive breeding are quite disappointing and fruitless, as the mortality rate of captive-born offspring is at almost 50% (one in two).

Discover the Little Known Aristocrats of the Animal Kingdom
We all know the lion and the tiger. But what other lesser-known species can we find among these aristocrats of the animal kingdom? Read more »
Link copied!
Interesting Articles
Mammals
The Role of the Gray Squirrel in Forests