Pikas or whistle rabbits are similar in appearance to common guinea pigs. These animals live in large communities in mountainous areas as well as on flat terrain. 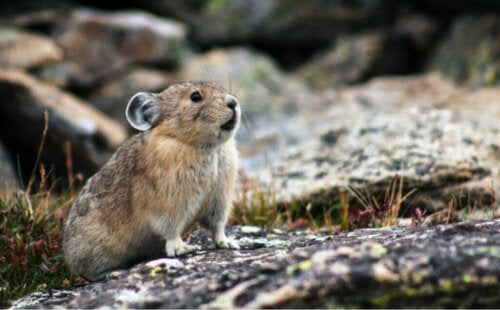 These furry creatures with teddy bear faces have been spotted several times in the high rocky mountains with green meadows of Tianshan —in northwest China. These fascinating animals hide between the rocks and make a whistling sound to attract the attention of their companions. That’s why pikas also receive the name of whistle rabbits.

Today we bring you all the information you need to know about this very small mammal, sometimes known as a pika and, in other cultures, as the whistle rabbit. What’s the reason for this peculiar characteristic of whistling? In this article, we’ll answer this question and many more.

What are pikas or whistle rabbits?

Whistle rabbits are small mammals that mainly live in the mountains. They belong to the genus Ochotona, a group of lagomorph mammals of the family Ochotonidae. These beautiful animals have the appearance of small mice or rabbits, due to their dexterous, fast movements.

Its peculiar squeak that it makes from time to time is what gives the animal its nickname of whistle rabbit. It inhabits some areas of Asia, however, there’s only one species (Ochotona pusillus) in Europe. Several other species live in North America.

Let’s take a look at why whistle rabbits are neither mice nor rabbits, but somewhere in between the two worlds. Here are some of their traits:

Whistle rabbits inhabit the rocky mountainous areas of colder climates. However, some species live in forested areas. Whether in the rocks or in the forest, their goal is to make the area their home. There they hide in shallow burrows where they store their food.

They’re community-oriented creatures, as they collaborate with all the other pikas to gather food and guard against predators, such as birds of prey and carnivorous mammals. These animals feed on shrub leaves, dried vegetables, and seeds.

A curious detail about the territoriality of whistle rabbits is that they can be aggressive towards each other, sometimes with the purpose of stealing food. They have the habit of storing food in their burrows for winter, when resources are scarce.

Pikas in the mountains

Curiously, when whistle rabbits build their burrows, they’re improving the quality of the soil. When they relieve themselves, their droppings provide organic material and, as a consequence, enable plant growth in the area.

If they feel threatened at any time, they hide in their burrow and wait until they feel safe. During the winter season, whistle rabbits take advantage of their ability to move easily among the rocks in order to take shelter under them, and so protect themselves from low temperatures.

Whistle rabbits are an endangered species

These cuddly animals are very elusive. In fact, very few specimens of certain species have been seen and, as a result, not much is known about their behavior. Some species of pikas are on the verge of extinction, according to the International Union for Conservation of Nature (IUCN).

Finally, pikas are in danger of disappearing, as their natural environment has shrunk by 71%. This is due to climate change and also to forced displacement by the growing population in the mountains where this furry animal lives.

The European Hamster: A Mammal in Grave Danger
Have you ever heard of the European hamster? This once very common species is now critically endangered. Let's take a look. Read more »