The Role of the Gray Squirrel in Forests

These small mammals are the key step in the regeneration of the United States’ forests. Keeping squirrel populations healthy is crucial to the future of ecosystems. 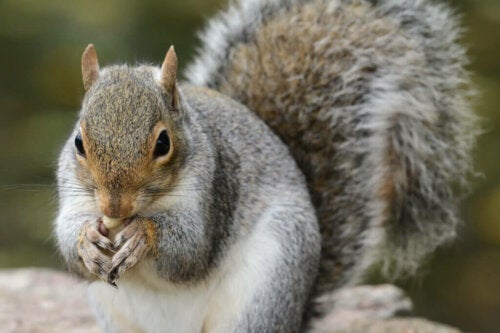 The gray squirrel has long been considered one of the most important animals with respect to forest regeneration. In fact, the scientific world has shown that these animals are the leaders in seed dispersal.

Even if they’re different species, their collecting behavior is practically the same, so they all help to regenerate the forests, but how do they do it? We’ll explain it to you in this article.

Factors that make the gray squirrel the best forest regenerator

There are several factors that make the gray squirrels receive the gold medal for best forest regenerators. All these factors are related to their ability to collect seeds and to what they do with them afterwards.

The gray squirrel buries the seeds

The main factor that makes the gray squirrel so successful is the enormous amount of tree seeds they’re capable to collect. Studies on these animals show that squirrels bury 97% of the seeds they collect and eat the remaining 3 % at once.

Of this large quantity of seeds buried by gray squirrels, 30% will never be recovered. These small mammals bury seeds with the idea of recovering them when food is scarce during the winter.

These buried and unrecovered seeds constitute, in their majority, the beginning of the regeneration of a forest. The lost seeds will germinate and give rise to new trees.

Selection of the healthiest seeds

The second most important factor that shows the high efficiency of the gray squirrel in regenerating the forest, is the type of seed it collects. Research shows that squirrels prefer to eat the damaged seeds or the ones with parasites straight away, and bury the healthier ones.

As a result, the genetic diversity of trees is maintained. As the strongest seeds prevail, these have a greater probability of germinating —if forgotten by squirrels— and of growing quickly.

If the information provided so far already shows the great work of this squirrel, you’ll marvel at what comes next —the gray squirrel keeps potential forest pests at bay!

Besides feeding on seeds, gray squirrels are good predators of insects and larvae. These arthropods are crucial in the diet of these mammals, as they provide a good amount of protein and essential fatty acids.

It’s normal for squirrels to attack insects and larvae that cause damage to seeds and trees. Thus they make the forest healthier by controlling the numbers of these insects.

Forest regeneration and the role of the gray squirrel

It’s obvious that the role of the gray squirrel regarding forest regeneration is very important due to its seed management. However, not all squirrel species behave the same.

The red squirrel (Tamiasciurus hudsonicus), for example, also collects a lot of seeds. The difference is that the red squirrel stores the seeds in tree cavities and only buries 11% of them.

Seeds stored in trees won’t serve to regenerate the forest, as they won’t germinate.

On the other hand, scientists point out that these squirrels don’t select healthy seeds. In conclusion, we can call the red squirrel a seed predator and not a forest regenerator as the gray squirrel is.

Conservation status of the gray squirrel

Fortunately, the gray squirrel isn’t an endangered species. The latest data from the International Union for Conservation of Nature (IUCN) shows that the numbers of this species are on the rise.

Also, their populations aren’t fragmented and many of them live in protected areas. Environmentalists and conservation scientists show the forest regenerates better and faster in the presence of gray squirrels.

Meet the Eurasian Jay: A Forest Gardener
The Eurasian Jay (Garrulus Glandarius) is a very special bird that inhabits all of Europe and much of Asia. We call it the forest gardener. Learn why here! Read more »
Link copied!
Interesting Articles
Mammals
All About Badgers: Characteristics, Habitat and Behavior

Interesting Articles
Animals
Omnivorous Animals: All You Need to Know