What You Should Know About the Zebra

The zebra has never been domesticated because it’s always tried to avoid its predators. This animal is a true survivor that will fight tooth and nail if it feels threatened. 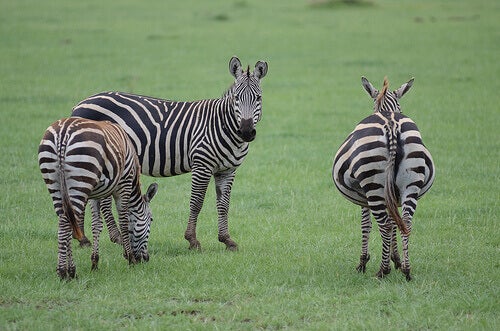 Famous for its black and white striped body, the zebra is a direct relative of the horse and the donkey. However, unlike these animals, it hasn’t been domesticated. In this very interesting article, we’ll tell you all about this particular mammal that lives in the wild in Africa.

Characteristics of the zebra

Although its black and white stripes are its main characteristic, the three subspecies of the zebra (Grévy’s, plains, and the mountain zebra) differ from each other precisely because of their different patterns.

With a similar appearance to the horse, but smaller in stature, zebras can weigh up to 660 pounds and measure up to five feet tall. Males and females are very similar to each other. In fact, males are usually only a few pounds heavier and a few inches taller.

Due to the fact that it has eyes on the sides of its head, this species has an excellent sense of sight. In fact, experts believe that the zebra can see in color like people. In addition, they can see objects and animals in the dark.

Also, they have a great sense of hearing due to their big ears, which are bigger than those of domestic horses and rounder as well. Their ears can move in almost any direction.

Why do zebras have stripes?

What all scientists have confirmed is that this rare fur is the best camouflage mechanism zebras use to avoid being eaten by their major predators, namely lions.

How does it work? The vertical stripes allow it to hide in the grass. It doesn’t matter if they’re black or white, as felines are color blind… They can’t distinguish colors!

Another defense mechanism zebras use to protect themselves is that, as they live in family groups or harems, the stripes that are close together confuse carnivores, since they don’t know if it’s a single giant animal or several animals.

In addition, the stripes have a social and sexual function. Pattern variations allow zebras to distinguish themselves from others in the family group or harem and attract the attention of the opposite sex during the breeding season.

The white stripes have a thermoregulatory function: they may help distribute fat under the animal’s skin. This way, they’d reduce high temperatures caused by direct contact with the sun.

Why humans haven’t been able to domesticate zebras

Although they’re relatives of the horse or donkey, this species “saved itself” from domestication. Some specimens were used for carrying objects and transportation in ancient times. However, humans haven’t been able to control this wild creature that seems so tame.

Why? Because the zebra is completely attentive and bold. Thousands of years of having to stay alert to avoid being eaten by a predator has given the zebra an imperturbable personality. Thus, this animal is completely resistant to methods of restraint and violent capture, whipping, or any attempt of domination humans exert on it.

Zebras are very good at fighting and running. In addition, they can bite and give in to panic if they’re nervous. Therefore, they’re unpredictable and undocile when cornered. In fact, they attack more zookeepers than lions or crocodiles! Although they seem calm, they’re wild and untamed.

Is It Possible to Recover Extinct Species?
Humans try to recover extinct species because we consider it a cruel fate. However, this has been pretty common since the beginning of time. Read more »
Link copied!
Interesting Articles
Mammals
Differences Between Asian and African Elephants