Apart from camels, North Africa is full of diverse and curious species. Some animals are forced to endure the extreme temperatures of the desert. 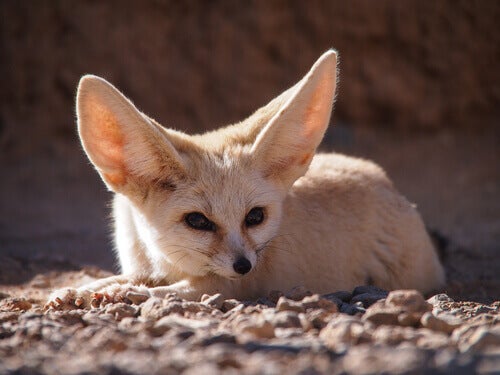 Camels aren’t the only Maghreb endemic animals as Moroccan fauna is quite vast.  This is because its territory comprises various ecosystems. We tell you more about the most representative species in this article.

What makes up the Moroccan fauna?

When we think of the Moroccan fauna, the image of a dromedary in the middle of the desert automatically comes to mind. However, many other species inhabit this North African country. Some of them are:

The fennec fox ⁠—photo at the beginning of this article⁠— is a carnivore that inhabits both Sahara and the Sinai Peninsula. It draws attention due to its large pointed ears. These allow it to cool its blood and reduce its body temperature during the day.

It’s the smallest canid in the family: it weighs no more than 2 kilograms (4 lb) and measures about 40 centimeters (16 in). The fur is light brown —like sand— and has a long, woolly tail that protects it during the cold desert nights.

It feeds on insects, birds, rodents, reptiles and eggs. Moreover, it has a great sense of hearing and can jump distances of one meter (3 ft) or more when hunting. The fennec is a very docile animal, easy to domesticate. However, keeping it as a pet is illegal.

It inhabits the deserts and steppes of North Africa, and is, unfortunately, in danger of extinction. The dama gazelle belongs to the bovine family and is the best known in Morocco. It’s also known as addra gazelle or mhorr gazelle.

It’s one of the largest gazelles in existence, and its fur is pale yellow with a white belly and reddish forehead. Both genders have antlers, but in males they’re larger: up to 80 centimeters (31 in) long.

It feeds on grass, leaves and branches of shrubs. When it senses danger, it jumps in order to move faster thanks to its long thin legs. It’s also a diurnal animal.

Of course, one of the most representative animals of the Moroccan fauna couldn’t be missing from the list. The dromedary is an artiodactyl and a ruminant mammal.

Very tall, with long thin legs allowing it to walk on sand without a problem, the dromedary can spend several days without drinking water. They serve as pack and riding animals, as they’re able to travel more than 150 kilometers (93 miles) per day without tiring.

Even if this carnivore is originally from Morocco, there are currently no specimens in the wild in this country. Unfortunately, all Barbary lions live today in captivity. However, many of them aren’t “pure bred”, as they’ve been crossed with other Panthera leo species.

The Barbary lion is large —three meters (10 feet) long and 250 kilos (551 lb) in weight— with a long tail of up to 70 centimeters (28 in). This solitary animal has a mane thicker than that of its close relatives.

It used to be a forest predator, accustomed to hunting in the mountains, even if sometimes it had to look for food in flat and desert areas.

Due to the reduction of its natural habitat and food, this species began to prey on domestic animals: dromedaries, goats and donkeys. This accelerated its disappearance in the wild as peasants hunted it down.

From the family of Moroccan reptiles, the Saharan spiny-tailed lizard is one of the most “famous” in the country. As its name indicates, it has a wide tail covered by thick scales.

This lizard changes color as it grows. The young ones have brown tones and the adults can be black with yellow spots.

They dig holes up to 2 meters (6.5 feet) deep in sand or clay soil to protect themselves from the night cold. However, as they’re cold-blooded, they can be seen sunbathing during the day. Finally, it’s one of the few herbivores of its family.

The African Wild Dog
An unknown species found in Africa, the African wild dog is known for the unique color of its coat and the loyality to its pack. Read more »
Link copied!
Interesting Articles
Mammals
The Role of the Gray Squirrel in Forests