Characteristics of the Small Gecko Lizard

These animals are capable of camouflaging themselves by changing their color. In addition, in order to defend themselves, they can drop their tail! In fact, it will remain wagging for a considerable amount of time to distract the attention of their predators while they flee in an elusive manner. 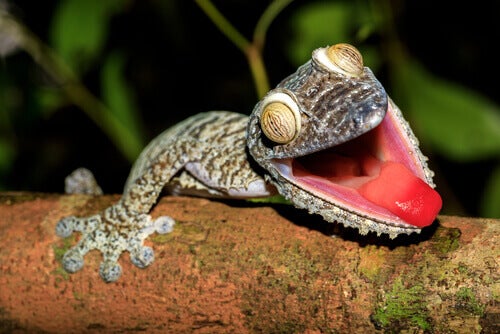 One of the most amazing species of lizards in the animal kingdom is the small gecko lizard. This cute reptile has special characteristics that make it a coveted pet, as well as a study subject for scientists. Why are these animals so interesting?

There are more than 1,500 subspecies of these small reptiles, which belong to the same family as chameleons and lizards. Their appearance varies according to the species, but they’re generally bright green, with long tails and large eyes.

Some geckos have other kinds of shades on their bodies, such as blue, orange, and yellow. Moreover, other species can even change their color according to the outside temperature or mood and even mimic their surroundings. As for their size, they vary from 0.6 to 14.5 inches long.

In order to survive, geckos need warm and humid temperatures. As a result, they’re abundant in tropical areas such as jungles. In addition, geckos are nocturnal, which means that they can see very well at night to locate prey and get their food.

Certain species have adapted to live in deserts and urban areas. In fact, they don’t mind sharing their habitat with humans and it’s very beneficial to keep them close by as they’re pest controllers.

They feed on insects such as cockroaches, worms, crickets, and mosquitoes. Some species are even omnivorous and also consume insects, flowers, fruits, and honey.

The reproduction cycle of these curious lizards is the same as that of other reptiles and depends on the abundance of food. When food is scarce, reproduction decreases. Therefore, geckos prefer to spend their energy looking for sustenance and leave mating for later.

The female produces a strong odor that attracts the male. Once fertilized, she looks for a safe place to lay her eggs, which hatch in a couple of months. As soon as they do, however, the newborn geckos survive on their own.

Some gecko species are asexual, meaning that the female has the ability to reproduce without needing a male to fertilize her.

These small reptiles have exceptional qualities that set them apart from the rest. One of them is their ability to cling to any surface, even if it’s as smooth as glass.

Their feet have pads with microscopic hairs that allow them to grip and move easily in all directions, even while upside down. In areas where they are abundant, it’s normal to see geckos running swiftly across ceilings, without any mobility problems.

Geckos are the only reptiles capable of emitting sounds, thanks to their vocal cords. In order to communicate with each other, defend their territory, or warn of possible dangers, they make different types of vocalizations that are similar to chirping.

As a defense mechanism, these small animals may drop their tails. The tail keeps wagging for a while, distracting predators as the reptile quickly slips away. In addition, the tail grows back in a matter of days. How convenient!

Having them as pets

Exotic pet enthusiasts will have geckos at home, and the most popular ones are the leopard geckos, because of their striking spotted appearance.

Having them as pets isn’t exactly easy, though, as these animals need some special care in terms of food and habitat. They should be kept in a terrarium that mimics their natural environment as much as possible, at an ideal temperature to keep them active.

Before acquiring one of these small reptiles, it’s best to be well-informed about all aspects related to their diet and habits so that they have a long and comfortable life.

The small gecko lizard and science

Scientists are trying to mimic the adhesive ability of geckos to create powerful glues. They’re also investigating this reptile’s amazing cellular regeneration ability. The latter would be of great help in the medical field, in order to accelerate wound healing and tissue reconstruction.

The Virgin Islands dwarf gecko is the smallest of them all, measuring only 0.7 inches long. It barely covers the space of a human fingernail! The largest of them used to live in New Zealand, measuring 23 inches long, but became extinct decades ago.

Undoubtedly, geckos, whose scientific name is Gekkonidae, are anything but ordinary. They’re fascinating reptiles with extraordinary, unique qualities. If you happen to have some in your house, consider yourself lucky! They’ll do a good job at controlling pests for you.