The Fauna of the Himalayan Mountains

Adapted to the freezing temperatures and high altitudes of the Himalayan mountains, these species protect themselves from the cold with thick or abundant fur. 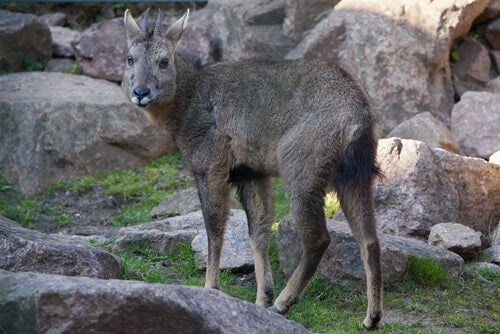 The Himalayan mountains, or the Himalayas, are the highest mountain range in the world and, although its climate is so adverse, many species have adapted in order to live there. In this article, we’ll tell you what animals belong to the Himalayan fauna. Believe it or not, this area is home to almost 400 wild species!

What is the fauna of the Himalayan mountains like?

Most of the inhabitants here are birds, although mammals are the most famous. The best time to see the Himalayan wildlife live is in autumn, from September to November, when the animals migrate to lower altitudes. Some of the most characteristic ones are:

This bovid is present throughout the Himalayan mountain range and its population is declining due to hunting. It lives in areas up to 4,000 meters (13,000 feet) above sea level and males occupy marked territories of about 62 acres. It’s very agile, runs at high speed, and feeds on grasses and leaves.

The goral, which appears in this article’s main image, measures about 51 inches and weighs about 88 pounds. It has gray or brown fur, brown legs, and a dark stripe on the spine. Both females and males have backward-curved horns that are almost 8 inches long.

This carnivorous mammal lives throughout the mountains of Central Asia at altitudes of up to 6,000 meters (20,000 feet) and not much is known about it. Its main characteristic is its thick, dense, spotted gray fur; it has a large tail that serves as a coat when it sleeps.


The snow leopard hunts by day and has the strength to catch animals three times its size. It has a very long jump and can walk among rocks or through snow without any problem thanks to its padded feet. It’s a solitary animal that, unlike other felines, doesn’t roar.

This bovid is another typical representative of the fauna of the Himalayan mountains. It lives in the steppes and cold deserts located between 13,000 and 20,000 feet above sea level, either wild or domesticated. The word ‘yak’ in Tibetan means ‘male’, so females are known as ‘nak’.


They’re known for their long fur, mostly on the abdomen (it can reach the ground), which is black or brown in color. They have long horns that are about 3 feet long and similar to those of the bull. Male specimens can weigh about 2200 pounds and live alone. Females with their young form herds of up to 12 individuals. They’re able to climb snow-capped mountains and love to bathe.

Its scientific name is Ursus arctos isabellinus, in honor of Queen Elizabeth, and it inhabits both the slopes of the Himalayas and the Karakorum. Since it’s very difficult to spot them, experts are unaware of many specimens inhabit the region.

The Himalayan brown bear shows great sexual dimorphism, with males reaching 87 inches in height and females 71 inches. Both sexes hibernate from October to April in a den or cave. They feed on plants, roots, insects, and small mammals, which they hunt after sunset.

The Himalayan fauna is composed of several goats, such as the tahr, which can be seen between India and Tibet. It can measure about 5.5 feet and weigh around 400 lb; it has short horns curved backward, and the males have a kind of mane that shelters them in the harsh winter.


One of the most outstanding characteristics of the tahr is that they can climb snow-covered rocks without any problem to obtain grass or trees to feed on. Males live alone and females with their young. They only come together during the breeding season and gestation – only one specimen at a time – lasts seven months.
Snow Leopard – Characteristics, Behavior and Habitat
The snow leopard or Panthera uncia, also known as the ounce, is one of the most important predators in the Central Asian mountain ranges. Read more »
Link copied!
Interesting Articles
Invertebrates
6 Curious Defense Mechanisms in Insects