The Fauna that Inhabits Canada

The fauna that inhabit Canada are resistant to low temperatures and live in forests and the tundra. Learn more about them in this article. 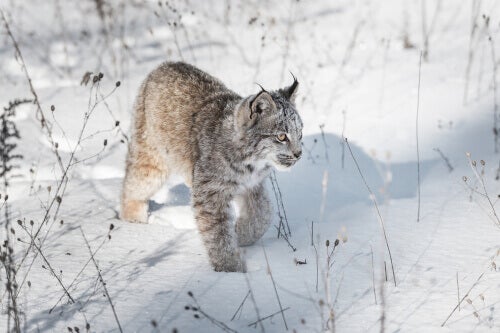 We could divide Canada into two great ecosystems: forest and tundra. In each of these regions there are different species of animals. In this article, we’ll tell you all about the fauna that inhabits Canada.

The fauna that inhabits Canada

The animals that live in Canada are similar to those of the forested regions of northern Europe and Asia. Also, we can highlight species that live in the tundra and arctic areas, such as the polar bear. Here are some of the fauna that inhabits Canada:

This carnivorous mammal of the cat family lives in both the Canadian and the Alaskan taiga. In addition, it sometimes lives in the forests of the northern United States. The Canadian lynx—which is seen in the cover photo of this article— has seen a dramatic reduction in its populations. This is the result of habitat destruction and hunting for their fur.

It’s no more than three feet in height, and has brown and yellowish fur that’s long enough to protect it from the cold. In terms of its diet, it eats hares, rodents, birds, and sometimes caribou, which it hunts at night. As for their reproduction, each season the females will give birth to up to five cubs.

It’s one of the most widespread birds of prey on the plant and its range extends from Eurasia to North Africa and North America. Because of that, it’s on the list of fauna that inhabits Canada; some live there, while others go for the winter or summer.

The golden eagle’s feathers are dark brown, its head is golden and it has white markings on the end of its tail and wings. Their legs are also covered with feathers. Females are larger than males: their wingspan can reach 7.5 feet. In addition, they hunt mice, hares, snakes, rabbits, and marmots from the air. Also, they even hunt foxes, goats, and small or sick deer.

These bears live in both North America and Eurasia, and they prefer temperate forests. Some of its subspecies also live in this area, such as grizzly bears or Kodiaks.

It can measure almost 10 feet long and weigh about 1300 pounds. Also, it’s plantigrade (its toes and feet are flat on the ground when it walks) and has a characteristic ‘hump’ on its back. Its fur is brown and it’s born with a white ‘collar.’ In addition, it feeds on vegetables, carrion, invertebrates, insects, salmon and honeycombs.

Another example of the fauna that inhabits Canada is the musk, a mammal that belongs to the bovine family. They’re famous for their long fur which is double-layered to withstand the cold, and their curved horns. Both sexes have horns, but they’re more developed in males.

The musk ox lives in areas with glaciation and they group themselves in herds of up to 100 individuals. Within these groups, the males compete with one another for the females. Then, once they copulate, gestation lasts for 9 months and they give birth to a single offspring. They will defend their young aggressively from predators like wolves.

When attacked, they form a circle, leaving the youngest in the center. Then, if necessary, they’ll lower their heads to charge with their horns.

Its scientific name is Mustela nivalis and it’s a carnivorous animal that lives in both Eurasia and North America. Although they’re small—no more than 10 inches tall and 7 ounces in weight—they’re efficient hunters. In fact, they can kill prey up to 10 times their size: rats, voles, mice, hares and birds.

In addition, weasels release a strong-smelling ‘urine’ to protect them from danger. They have elongated bodies, small snouts, short tails and legs, and large whiskers. Also, their coats are denser in the winter and softer in the summer. They always have brown on their coats and a lighter color on their bellies.

A Mummified Wolf Cub Was Discovered in Canada
Just two years ago, in the Yukon region of Canada, a team of miners discovered a perfectly preserved, mummified wolf cub. It was a fascinating discovery! Read more »
Link copied!
Interesting Articles
Wild Animals
5 Animals that Live in Grasslands