Does the Flu Virus Affect Animals as Well?

The flu is a common illness that we're all familiar with, which affects humans annually. But, did you know that viruses can affect animals as well? In today's article, we'll talk about several examples. 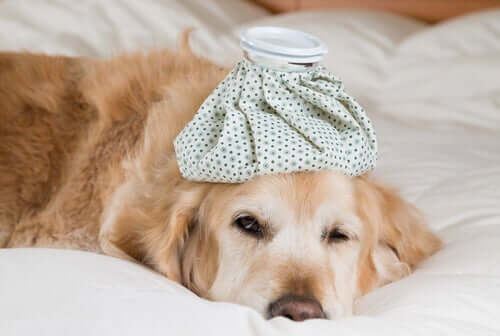 Without a doubt, the common flu virus continues to be one of the most well-known viruses to date. But are humans the only ones that can get the flu? Or can viruses affect animals as well?

Have you ever asked yourself this question? And if the answer’s yes, then are we talking about an “animal flu”? What do we need to keep in mind? Don’t worry, we’ll answer all your questions in this article.

Viruses live among living beings in an intrinsic way. This is due to the fact that they are infectious agents that can only multiply within the cells of another living organism. So then, in order for viruses to survive, there must be a continuous infection among other living beings.

Viruses “kidnap” cells, replicate the genetic information inside them, and then leave the body–usually by means of secretions–in order to infect other organisms.

The flu is the most well-known type of virus, and the Influenza B virus is the one that affects humans almost exclusively. Although it can also infect seals!

While it manifests itself somewhat differently than in humans, the animal flu also exists.

The bird flu is caused by the genus Influenza A virus, and is relatively similar to the one that affects human beings. Undoubtedly, this virus sounds familiar, as a variant of this flu is what caused the type A flu pandemic in 2009.

The Avian flu virus circulates naturally. It has been detected in over 100 wild bird species.

Some of the initial symptoms include the rippling of their feathers and a decrease in the laying of eggs. In more severe cases, the flu can cause diarrhea, asphyxia, and even the animal’s death.

On an even more disturbing note, we must point out that there’s no treatment for this flu in birds. While treatment does exist for humans, the only option for birds that suffer from this infection is euthanasia.

Cat flu is a term that’s used to describe the typical symptomatology in cats. This includes respiratory difficulty, nasal congestion, etc. It can occur as a result of two types of viruses or bacteria. But, in a stricter sense, there’s no specific type of flu virus that affects cats. Just the same, cats aren’t exempt from the common flu:

Species of the Influenza A genus can affect bats. Multiple studies have predicted that these viruses would have to undergo massive changes in order to pose a danger to humans.

Pigs can become ill from viruses belonging to the genus Influenzavirus C, which is the famous swine flu. The rate of contagion among pigs is extremely high. In fact, it can come to infect 100% of animals in a given area very quickly.

Just the same, the mortality rate is low and most animals recover without any intervention in a matter of a week. Swine flu doesn’t usually affect human beings, although it has occurred in isolated cases.

And can you believe that certain flu viruses can affect whales? Experts believe that these viruses spread among these giant aquatic mammals through the feces or direct contact with waterbirds.

Adaptability: The greatest weapon of viruses

The key to the success of flu viruses that affect animals is their great ability to adapt.

Viruses undergo mutations over time, confusing the immune system and making it harder and harder to combat them. Have you ever asked yourself why the flu vaccine is annual? The reason is the virus’s adaptability.

The high rate at which they change and adapt allows flu viruses to spread among hosts of different species, causing illnesses that are almost imperceptible as well as severe respiratory infections. One thing is clear: viruses don’t only affect humans; they also affect animals.

Coronavirus and Dog Kisses: Are They Safe?
Recently, concerns about whether domestic pets can play a role in the spread of COVID-19 have surfaced. Dog kisses and COVID-19: Is it safe? Read more »
Link copied!
Interesting Articles
Illnesses and Treatment
Mycotoxins and Animal Production