Over 300 Species of Sharks and Rays in Danger of Extinction

More than 300 species of sharks and rays are in danger of extinction. Animals that were once the kings of the seas are now threatened by human action. 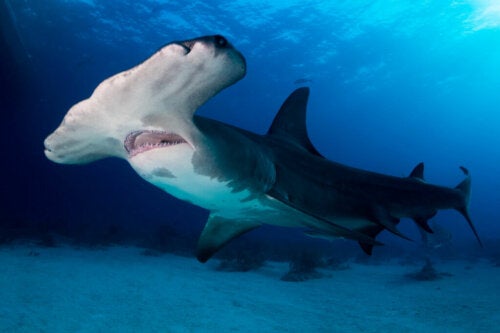 In December 2020, the International Union for Conservation of Nature (IUCN) published a report on biodiversity and the current outlook on extinction. The data isn’t encouraging: of 128,918 species analyzed, more than 35,000 are in danger of extinction. Even worse is that 31 species officially became extinct in recent times. It’s also important to understand that certain marine animals — especially sharks and rays — are getting the worst of it. If you want to know why, read on.

The news and the report

According to the prestigious NBC news website, the IUCN estimated that over 300 species of sharks and rays are in danger of extinction. Among them are 4 types of hammerhead sharks, 4 species of angel sharks and the giant manta ray (Mobula birostris).

According to Andy Cornish, WWF representative for the preservation of sharks and rays: “these results were sadly predictable.” As the expert indicates: “it’s been 20 years since the risk of fishing these animals was recognized at an international level, but not enough has been done to put an end to it.”

In addition to these reports, the cited official document shows us equally, or even more, devastating data. Among them, we find the following:

We could go on with the list for a while, but we think the idea is clear. Deforestation, indiscriminate hunting and climate change —among many other factors— are causing the planet’s slow but constant death. If we continue like this, we’ll soon find ourselves at the point of no return.

Why are so many sharks in danger of extinction?

Unfortunately, it’s time to look in the mirror again to answer this question. For example, the World Economic Forum website shows us that the population sizes of many shark species are proportional to their proximity to urban centers and the degree of poverty of their inhabitants.

As lethal as these animals may seem to us, we’re much more harmful to them than vice versa. Poachers still hunt several species of sharks for their fins —with unfounded properties— and meat. Moreover, the fact that these fish are prone to extinction due to their slow growth and low reproductive rate, further aggravates their situation.

Sharks are functionally extinct in 20% of the coral reefs that have been sampled to date.

The importance of sharks and rays in ecosystems

Beyond their unfounded bad reputation, these animals are essential super predators for the maintenance of the food chain in marine ecosystems. Still, it’s not all about predation. Here are some ways in which sharks benefit marine habitats:

Beyond this, sharks and rays are also a great tourist interest for the more adventurous ones. If done correctly, ecotourism can promote habitat preservation and generate economic benefit for poorer communities that would otherwise resort to indiscriminate fishing and hunting for a living.

Sharks and rays: species in danger of extinction

In short, sharks are essential to marine life and to the maintenance of aquatic ecosystems. Let’s hope that government measures will be increasingly tougher to prevent fishing from further undermining the populations of these species so that they can once again own the seas.