Cleo, a four-year-old Labrador female, traveled more than 80 kilometers to reach her former home after getting lost. Find out how she did it. 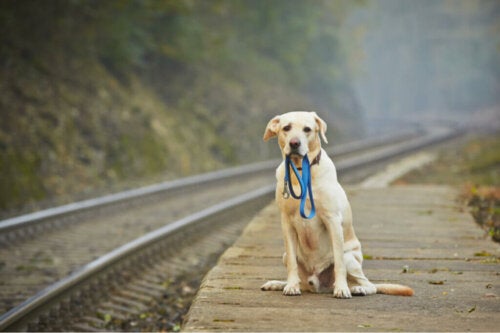 Last May, a surprising news item emerged in the American newspapers: a lost dog walked 50 miles (80 kilometers) to its former home in search of its owners. As surprising and charming as this story may be, the event highlights the little knowledge we still have about the sense of orientation and memory of dogs.

How could it travel so far to return home? What physiological mechanisms do dogs use to find their way back? If you want to know the answers to these questions, read on.

On July 12, a four-year-old Labrador female was reported lost in the city of Olathe, Kansas. To the surprise of the media, this brave dog was found in her former home in Lawson, Missouri, nearly 60 miles away from where her disappearance was reported.

The Daily Star newspaper relays that the current owners of the house (who have been there for two years) located the dog lingering around the home, and after a while of distrust, they managed to gain the confidence of the dog and take it to the vet. The dog, named Cleo, was returned to its owners, who were more than 50 miles away.

This news is especially surprising not only because of the unimaginable journey this dog made to reach its former home. Cleo also had to cross roads full of traffic and even busy bridges and a river.

How do lost dogs return home?

This isn’t the first case in which a lost dog walked home from a long distance. For example, in 2014, a cat named Holly traveled 200 miles (more than 320 kilometers) to return home. She had been lost about two months previously while on vacation with its owners. This is also the case of Hank, a dog who walked 11 miles to return to his animal protector once he was moved into a foster home.

How dogs and other pets manage to orientate themselves at such long distances is, even if partially, a mystery. As in many other cases, this extraordinary ability seems to lie in the effectiveness of canine smell. Dogs have between 220 million and two billion olfactory receptors in their noses, which results in an extraordinary ability to recognize and follow traces and essences.

Besides following essences directly, they’re also able to link cyclic series of scents to reach a specific point. In other words, if they don’t find the scent of their home directly, they can recognize the smell of a poster or of a dumpster located at a certain distance from home. Thus, they can gradually get closer to their target.

It’s not all about sniffing

According to the Science magazine, dogs can also use the electromagnetic field of the Earth to orientate themselves in the three-dimensional space. This allows them to create shortcuts in unknown places, which brings them closer more quickly and effectively to their destination.

These suppositions are based on scientific studies such as the one mentioned above. As part of such studies, GPS devices are placed on dogs to find out how they return to their keepers by following a distinctive trace over long distances. The results show that they could use the layout of the terrestrial electromagnetic field to plan their routes. However, this requires further study.

A happy ending that doesn’t always get fulfilled

For each case like that of Cleo, Holly, or Hank, there are thousands of unsuccessful cases of lost pets that never return home. This is partly because scents don’t last forever. Depending on various factors such as humidity or wind, these particles dissipate with time, which prevents dogs from returning home.

Therefore, it’s necessary that all pet owners take special care when exposing animals to the outside environment. As much as stimulating curiosity is good for dogs, carefully monitoring their movements is always essential to avoid unpleasant events.

Daily Walks: 5 Reasons to Maintain this Routine
Most dogs need daily walks, although very active dogs may require even more. The length and rhythm of walks will depend on each animal. Read more »
Link copied!
Interesting Articles
Dogs
Blue Dogs Suddenly Appear in a Russian City