Located in the United States and Europe, these are huge exhibitions with current and past flora and fauna. Some specialize on a certain age, and others are more varied. 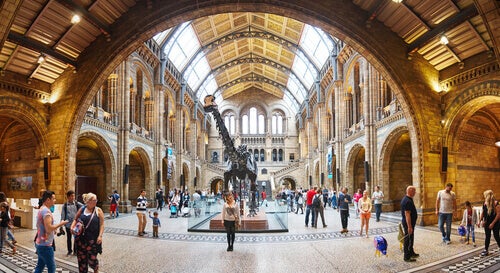 In the halls of these wonderful places we can learn a lot about flora, and current and ancient fauna. They’re included in the typical tourist tours, especially if you travel with children. In this article, we’ll tell you which are the best natural history museums in the world, so don’t miss out!

Which are the best natural history museums?

Some of the museums take days to visit in their entirety, others specialize in a particular age, and others exhibit “a little bit of everything” in their halls. Either way, these are the best natural history museums in the world:

This is one of the three museums in the borough of Kensington –the other two being the Science Museum and the Victoria and Albert Museum. It has a collection of 70 million specimens and objects belonging to the research fields of zoology, paleontology, botany, mineralogy and entomology.

The Natural History Museum in London –in the photo at the beginning of this article– hosts several of the specimens that Charles Darwin studied in his travels, and that gave us his theory of the evolution of the species. It also offers a hall with different fossil remains and dinosaur skeletons. And, of course, it stands out due to the great American mastodon at the entrance.

This isn’t only one of the best natural history museums, but also one of the most famous and largest in the world. It’s located in front of Central Park on the island of Manhattan, and has a total of 27 buildings connected to each other.

The American Museum of Natural History has 46 permanent exhibition halls, a library, and research laboratories. The collection includes more than 32 million specimens –not all of which are exhibited at the same time– and was founded in 1869. One of its best-known sectors is the entrance hall, because it houses several dinosaur skeletons.

Also in the United States, and at 1 hour by train from the previous one, we can see this impressive national museum of natural history. It contains 125 million specimens of plants, fossils, animals, rocks, minerals, meteorites, and human cultural objects.

The main collections are on the first floor, with its hall of stuffed mammals from all over the world. On the second floor, however, we can find dinosaur fossils and skeletons, a collection of gems and an insect zoo. Also, in the basement you can see a collection of 100 regional birds.

This museum is a public institution of scientific research in France. Although located in the capital, it’s not usually as popular with visitors as other attractions in the city. You can visit this museum at different locations in Paris. So, we have the Jardin des Plantes, the Zoo, the Institute of Human Paleontology and the Musée de l’Homme.

There are several facilities open to the public. Hence, there’s the Ménagerie du Jardin des Plantes, which is the second oldest zoo in the world after the Vienna Zoo. There’s also the Grand Gallery of Evolution displaying stuffed animals. And finally, the Gallery of Paleontology and Comparative Anatomy exhibiting large fossil skeletons.

Last but not least, we finish this ranking of the best natural history museums with the one we can find in the Spanish capital. We’re referring to the old Palacio de las Artes y la Industria on Paseo de la Castellana.

This museum was founded in 1815, closed during the Civil War and then reformed in 1984. Among its collections we can find 6 million specimens. These are divided into the following sections: biogeography, biodiversity, environmental biology, evolutionary ecology, geology and paleobiology. It also offers didactic workshops, a media library and a book library.

A Cat Has Become a Museum Custodian
Today, we're going to tell you the story of how a cat became a museum custodian in Russia. It's not out of a movie, it's real--read on to learn more! Read more »
Link copied!
Interesting Articles
Dogs
Can Music Relax Dogs?