The European Bison: A Story of Overcoming the Odds

Hunting and heavy logging nearly drove the European Bison to extinction. Fortunately, a breeding program has led to its recovery. 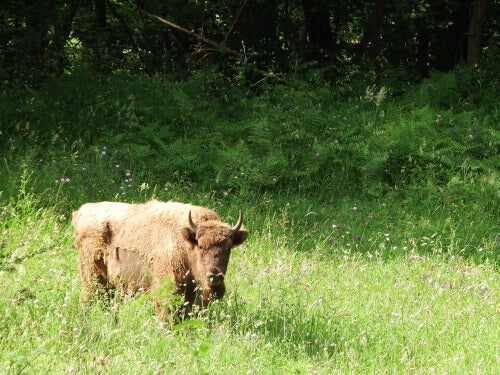 Believe it or not, thousands of years ago, it was common to find the legendary European bison all over Europe. This animal was by no means exclusive to the American West. In fact, it still adorns caves such as Altamira, proving that the European grasslands were once home to the bison.

Unfortunately, bison have been one of the most heavily hunted animals in human history. In fact, both the Yellowstone bison and the European bison (Bison bonasus) are near extinction due to hunting.

In the case of the European bison, the few specimens that survived have allowed a large population of this animal to exist at present. This is thanks to conservation programs.

Thousands of years ago, they were abundant animals. However, the truth is that the growing human population gradually reduced their habitat by means of massive logging and hunting. In the 14th century, there were already records of their decline, when they disappeared from countries such as France.

The bison lasted a few more years. This is thanks to the fact that, in countries such as Poland, only royalty and their companions could hunt them. However, the First World War caused many of these animals to be used as food. So, at the beginning of the 20th century, this animal became extinct in the wild.

At that time, the last free-ranging European bison lived in the Caucasus around 1927. However, one of the most successful conservation and captive breeding programs in recent history turned things around.

How is the European bison returning to European forests?

So, a protective agency for the species and a breeding program came into existence with the last 50 European bison. And, fortunately, this allowed the reintroduction of about 12 specimens into the forests of Poland in the 1950s.

Thanks to the captive breeding program, along with re-introductions into the wild and semi-freedom environments, the more than 5,000 bison that now populate the European Union have come from those 12 animals. These animals live mainly in Poland, Russia, Romania, Ukraine, and other eastern countries.

Of course, even though this is a great achievement, there’s a price to pay. European bison populations are genetically poor, as are other species that have survived extinction, such as the mountain gorilla.

Although many of them remain in captivity, the fact is that almost 3,000 European bison have repopulated European forests. This is a great achievement, considering that this endangered species was practically extinct not long ago.

European bison are making a comeback in rural areas

The truth is that the efforts to reintroduce the European bison aren’t only occurring in its natural habitat. And some people call its reintroduction in countries such as Spain controversial, even though it’s being carried out mainly in semi-freedom.

However, others suggest that, although the species that inhabited Spain 10,000 years ago isn’t the same as the European bison, this animal fulfills the same ecological function as its Iberian ancestor. In fact, it can even be a great tool in fighting fires.

In addition, many rural areas are creating their own small herds of bison. Several environmental education projects related to prehistory and conservation have emerged. They use these peaceful animals as a common thread in their tasks of education and enrichment of the villages that host them.

You can find these projects in Spanish regions such as Palencia, Asturias, Leon, and Burgos. Through them, you can learn about the biology and ecology of these formidable animals. All this while you observe how they live with other species reminiscent of prehistoric times, such as Heck’s aurochs or Przewalski’s horses.

These bison seem to be beneficial for the ecosystems. Of course, this reintroduction of the species must take place carefully and according to scientific criteria, which will be beneficial for humans and for the bison. And who doesn’t find it exciting to see bison again as our ancestors did?

The Characteristics of the Eurasian Auroch
The Eurasian auroch is the ancestor of the domestic cows and bulls we know. It roamed freely until its disappearance in 1627. Read more »
Link copied!
Interesting Articles
Mammals
Pikas or Whistle Rabbits: Habitat and Characteristics