Although birds prefer the air, there are others such as the common loon, which stand out for their skill in fishing, diving, and other unique qualities. 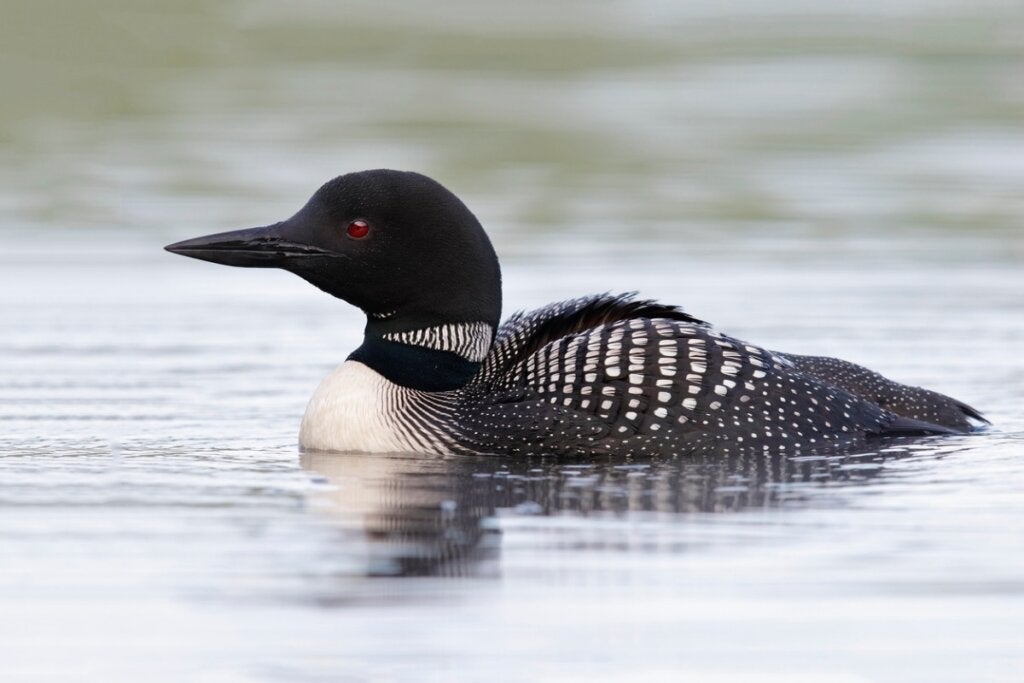 The common or great loon (Gavia immer ) is a species belonging to the Gaviidae family, typical of North America and Europe. This is a migratory bird that chooses its breeding grounds in the lakes of North America, Greenland, Iceland and Great Britain. In addition, in winter it migrates to the coasts of the North Atlantic and the Northeast Pacific.

The plumage of the common loon is characterized by showing a black tone on the head and neck, except for a band that’s shaped like a collar around the middle of the neck in the breeding season. Likewise, the upper parts are also black, with a slight white hue.

Its eyes are distinguished by being completely round and deep red.

While it still isn’t time for reproduction, its color is blackish brown in the upper parts and white in the lower parts, which includes the throat and the front part of the neck. Its beak is straight and blackish-blue, which distinguishes it from the Adams loon, whose beak is tilted slightly upwards and is yellowish in color.

Behavior of the common loon

The loon is a bird that catches its prey by diving, and it manages to reach depths of 60 meters (200 feet), where it can remain submerged for 3 minutes without breathing. Among their favorite freshwater prey we can mention pike, perch and trout, among others. Likewise, their saltwater prey can be redfish and sardines.

Interestingly, it has been observed that when these birds land in water, they do so with their belly. In this way, they lose speed sliding on the water.

Another of the most special characteristics of this animal is that it needs to run long distances to gain momentum and get off the ground. This particularity is due to the fact that its legs are far behind its body, which makes landing quite difficult. These types of legs are ideal for diving, but not for walking.

As mentioned above, the common loon’s breeding ground is the upper part of the globe, in countries like North America, Greenland, Iceland, and Great Britain. In winter, these birds migrate to the south and to the coastal waters of North America and Europe, as well as to the coasts of Northwest Africa.

On the other hand, the presence of the common loon is an indicator of the quality of the water, as it usually prefers clean and crystalline areas. As for its diet, it’s an excellent fisher. The bulk of its diet is fish, such as freshwater perch and moonfish in the northern lakes.

However, when fish are scarce, these birds resort to feeding on crustaceans, snails, leeches, and even aquatic insect larvae. When hibernating, this species has been observed to feed on small fish, such as the Atlantic croaker, and sometimes they gather in groups to chase schools of silversides.

Reproduction of the common loon

In general, this species nests in the islands of the lakes, to protect its young from terrestrial predators. However, this mechanism doesn’t work in all cases, due to predators that manage to reach these areas, such as gulls, corvids and skunks, among others.

On the other hand, although adults don’t suffer predation at the hands of many species, they’re easy prey for sea otters in winter and also die from attacks by bald eagles.

Because of this, the common loon chooses to defend its nest by attacking intruders. It does this by stinging the abdomen, back, head or neck. The clutch takes place once a year between April and June, where the female lays 1 to 3 eggs near the water, in a mound that’s protected by both parents.

As you can appreciate, the common loon is a master bird in the art of diving and fishing. However, it’ a species threatened by man and many specimens have disappeared due to acid rain and pollution. For this reason, several strategies have been implemented to help conserve this unique species.

All About Ducks and Their Relatives
"Duck" is a colloquial term that we use to refer to many aquatic birds. Today, well talk about ducks and their relatives. Read more »
Link copied!
Interesting Articles
Birds
Argentavis Magnificens: The Largest Bird in the World