Diurnal Birds of Prey, Rulers of the Summits

Here are some of the most important diurnal birds of prey across the globe. This article will tell you enough for you to realize why we consider them rulers of the summits. 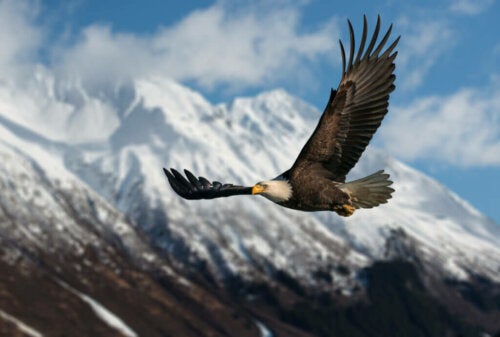 Flying birds have mastery over the wind, that’s for sure; however, the remarkable abilities that distinguish diurnal birds of prey give them a privileged position in the food chain. In other words, they rule the summits.

These animals are loners and usually build their bachelor pads on rocks, cliffs, and in the treetops. Provided with robust wings, they can rise to great heights and fly at high speeds. In addition, their eyesight is sharp and allows them to see prey from far, far away. Thus, they’re fantastic hunters.

Eagles are the most symbolic birds in popular culture. They belong to the family Accipitridae and are scattered all over the world in the form of multiple species.

Haliaeetus leucocephalus belongs to the group of sea eagles (not to be confused with Ospreys). It has the habit of gliding over the water in search of fish to capture with a quick skinny dip. They eat rabbits, squirrels, or rodents if there’s no fish available. Sometimes they even prey on foxes and fawns.

People have been attributing them all sorts of misdeeds at some point or another throughout history. However, it isn’t true that this bird enjoys picking up little children.

A royal predator? Some curiosities about the golden eagle

Aquila chrysaetos is one of the most widely distributed birds of prey in the world. It nests on rocky outcrops throughout the Northern Hemisphere and covers much of North America, Eurasia, and North Africa.

They have a strong musculature and can accomplish extraordinary attacks. In the past, Tartars bred them in captivity and trained them for hunting.

Harpia harpyja inhabits places all the way from southern Mexico to Argentina, thus they populate a large part of North and South America. They’re the largest eagle in the Western Southern Hemisphere. Their powerful claws are pretty handy when it comes to catching small prey. Also, possible predators have another think coming if they consider approaching these animals’ nests.

This eagle stands out for their ability to stay in the air and glide in circles for a long time while they scan the ground for food. This awesome hunter becomes a supersonic glider as soon as it spots a reptile or rodent. They swoop down on it as they retract their wings and hold them tight beside their bodies. The common buzzard (Buteo buteo) lives in Europe and the red buzzard (Buteo jamaicensis) in America.

The diurnal birds of prey known as “kites”

The main characteristics of kites are their narrow wings, thin legs, and light flight. The best-known one might just be the red kite (Milvus Milvus), whose wingspan can reach over 5 feet. These animals inhabit Europe, where they prefer to glide in open uninhabited areas. They nest in tall trees and lay about three or four large eggs.

The swamp kite (Rostrhamus sociabilis) extends from Florida to Argentina and inhabits swampy areas. There they stalk snails and skillfully extract them from their shells once they’re perched on their favorite branch.

Thus, finding a pile of empty shells under a tree is a clue of who just had a feast in there.

Here are some other families that are smaller than the previous ones, but just as well-known.

The common hawk (Accipiter nisus) present in many areas of Eurasia and North Africa belongs to this family. The sparrowhawk can be in any habitat, although it’s mainly a predator of forest birds.

They hunt garden birds in cities and is one of the most sexually dimorphic birds of prey in terms of size. The female can be up to 25% larger than the male.

The Northern goshawk (Accipiter gentilis) is larger and more vigorous than the sparrowhawk. Their main characteristic is the length of their rounded wings. Also, their claws are powerful and deadly. It can easily and equally capture an animal that runs, swims.

The falcons, well-known birds of prey

The peregrine falcon (Falco peregrinus) is one of the fastest birds of prey. It swoops down on its prey, usually small birds, at speeds of about 170 miles per hour. They’re one of the most commonly used species in falconry due to their extraordinary speed.

Falconry fans consider this powerful bird of prey a “noble bird” of high flight along with the gyrfalcon, just the opposite of the sparrowhawk, an “ignoble bird” of low flight.

Also, some people claim the gyrfalcon (Falco rusticolus), native to the Arctic regions, is the strongest and most beautiful of all falcons. The claws of this animal are so powerful they can literally pierce their victims as they pick them up.

The kestrel (Falco tinnunculus) is a smaller bird of prey that has sharp, strong claws. Furthermore, they feed on rodents and insects and this is why humans consider it an important pest controller in agricultural areas. Finally, one of their most outstanding features is their ability to remain motionless in the air. It’s as if they were hanging by a thread.

As you can see, diurnal birds of prey are as graceful as they’re fast and lethal for small vertebrates. It’s essential to preserve them and keep their numbers stable. This is because they’re great for maintaining low populations of insects and small mammals that can damage crops.