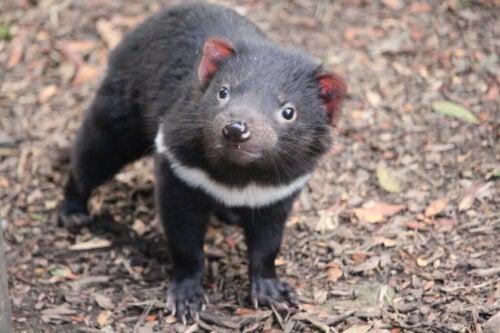 There’s some good news in the world of animal conservation, official sources recently revealed that the Tasmanian devil has returned to mainland Australia after 3000 years.

This species disappeared from the Australian continent in the middle of the Holocene period –the current geological era. The causes aren’t fully known but the Tasmanian devil was confined to the island of Tasmania, a small island state that belongs to the government of Australia.

This is great news for all ecologists and conservationists worldwide because it shows that, even on rare occasions, human beings can restore the land they once took away from other species.

Australia, the lost land of the Tasmanian devil

The Tasmanian devil (Sarcophilus harrisii) is a marsupial that belongs to the family Dasyuridae. Note that it’s the largest carnivorous marsupial in the world and about the size of a small dog.

Beyond its morphological characteristics, this species is interesting due to its survival under rather limiting conditions. For thousands of years, the island of Tasmania was their main area of distribution, it’s about 42253 square miles located off the southern coast of the Australian continent.

In addition, the International Union for Conservation of Nature (IUCN) considers this marsupial an endangered species. According to their estimates, there are currently no more than 15,000 individuals in the wild. How did they get there though?

This species was distributed throughout the Australian continent in the middle of the Pleistocene. However, its populations reduced to three remaining groups on the island of Tasmania during the Holocene.

We don’t really know the exact causes of this exaggerated decline. However, we do know it coincided with the expansion of dingoes -a wolf species- and aborigines throughout the continent. It isn’t clear if direct hunting, interspecific competition, or a combination of factors led to their disappearance.

Even so, the ordeal of the Tasmanian devil didn’t end when they ended up confined to the island. In fact, these are two disastrous events for this species:

In addition to this, Tasmanian devils experience a unique type of facial cancer. Estimates indicate that this pathology was another cause of the decrease of 20% to 80% of the populations in some areas.

As you can see, this scary marsupial has had a hard time historically speaking. Besides the continuous hunting over the years, it has had to face the only type of cancer that’s contagious.

Good news for the Tasmanian devil

Professional sources such as National Geographic magazine underline the importance of the news we mentioned above. This is because it’s a new opportunity for the survival of the species.

Thanks to the ambitious Devil Comeback project – promoted by organizations Aussie Ark, WildArk, and Global Wildlife conservation – 26 Tasmanian devils have been released in the Barrington Tops nature sanctuary.

This is a reserve of about 400 hectares located in the state of New South Wales. Beyond the exact geographical location, the most important thing is the Tasmanian devil is back on the Australian continent.

The efforts for its conservation don’t end here though. The mentioned organizations plan to integrate about 40 more individuals in the next two years after the success of the first reintroduction. The hope is for this marsupial to settle back into its original environment.

This isn’t only to encourage the proliferation of the species but also to achieve a more balanced and natural ecosystem with native predators.

As you can see, the reintroduction of the Tasmanian devil to the Australian continent didn’t happen by accident. This plan involved decades of effort by multiple organizations. Surely we would be facing the extinction of the species without their involvement.

Characteristics of the Tasmanian Tiger
The Tasmanian tiger, also known as marsupial wolf, thylacine or Tasmanian wolf was a marsupial mammal that lived until the 20th century. Read more »
Link copied!
Interesting Articles
Wild Animals
What Animals Live on the Canary Islands?