Why Do Cats Hate Water?

In most cases, cats hate water, and even if it may not seem like it, this behavior corresponds to a series of ancestral evolutionary adaptations of the species. 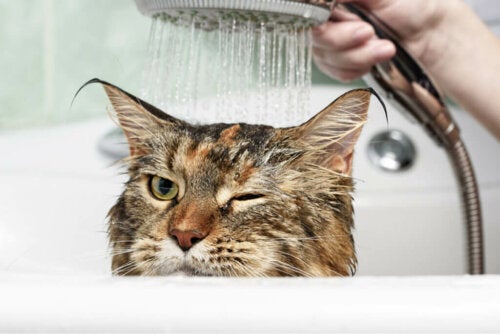 The idea that cats hate water is one of the most widespread preconceptions of popular culture. Even if there are evolutionary mechanisms that could justify the felines’ fear of this fluid, it seems that the personality of each animal is more conditioning than its genetic code.

Besides a fear generated by unfamiliarity, cats fear water due to negative experiences, the feeling of being overwhelmed by their wet fur, or even their ability to smell the chemicals in the water. Here we show you why this behavior is so widespread in the cat world.

About the evolutionary history of cats

According to archaeological studies, the domestic cat (Felis silvestris catus) is a direct descendant of the African cat Felis silvestris lybica, a feline subspecies native to North Africa and the Middle East.

It’s believed that farmers from the Middle East came into contact with these wild cats about 10,000 years ago. One reason for domesticating them could be that farming villages suffered from rodent infestation, so they allowed and encouraged the presence of these cats on their streets and fields.

This is the case of a symbiotic relationship, as cats obtained food and human settlements were eradicating plagues, with all the benefits involved. Close contact over hundreds of years would have caused the emergence of the relationship we know today.

Why is this relevant in understanding the fact that cats hate water? Well, as we’ve said, these domestic cats are direct descendants of a species typical to the Orient, a region with a landscape dominated by arid areas, deserts, and grasslands.

Obviously, we’re speaking of an area where water is scarce, so the closest relative of the domestic cat has no need to naturally approach this fluid. Furthermore, as their diet is mostly based on rodents and birds, they don’t have to venture to riverbanks in search of prey, save for a few exceptions.

The natural habitat of the African cat is in savannas and steppes, areas known for their lack of water. Therefore, it has never learned to swim.

Why do cats hate water?

Beyond their ancestral genetic condition, domestic cats haven’t evolved to be in contact with water over the years. Therefore, exposure to water causes them discomfort in various ways. Some of the feelings of discomfort that a bathed feline experiences are the following:

As we can see, cats are simply not adapted for swimming, nor for getting in contact with water. Their fur gets soaked quickly, which hinders their walking and increases their body weight. Also, their ears fill up with fluid easily, causing a very unpleasant sensation to the animal.

Should you bathe your cat?

After the above-mentioned facts, it’s natural to ask this question. The straight answer is that it’s not necessary to do it frequently, as this feline takes care of its own hygiene by licking.

Even so, from the age of one year it’s alright to give the cat a bath every three or four months. Fur dyspigmentation, the greasy consistency of the fur and bad smell are unquestionable signs that the cat needs a shower.

There are exceptions to the rule

While it’s true that most cats don’t love exposure to water, there are breeds like the Maine Coon. They have a much more waterproof fur, so they don’t mind taking a quick dip from time to time.

This adaptation is the result of human selection, hence it’s not a characteristic that defines the species in general. Cats come from arid and dry environments, therefore, their contact with water has been very limited historically speaking.

How to Clean Your Cat Without Giving Him a Bath
It's common sense that cats don't like water. That's why there are certain products and tricks that are useful for washing a cat without giving it a bath. Read more »
Link copied!
Interesting Articles
Bath Time
Why Bathing Is Important for Canaries

Bath Time
How Often Should You Wash Your Cat?

Cats have a reputation for constantly, meticulously cleaning themselves. They generally do this with their tongue, which has little barbs that…

As everyone knows, cats are very clean animals. It's also well-known that cats are afraid of water. So today, let's take a…