If a dog doesn’t clot, continuous bleedings will alert their owner that something’s wrong. But what if a pet suffers from excessive blood clotting? In this interesting article, learn all about hypercoagulability in dogs. 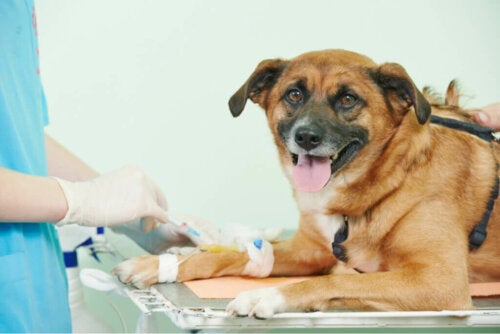 There are several clotting disorders, and hypercoagulability in dogs is caused by excessive blood clotting.

For different reasons, this system works far more “efficiently” than it should. Thus, it’s more likely for thrombi to occur, with the risks that this entails. Diseases that predispose to hypercoagulability aren’t uncommon in veterinary medicine.

Dogs can suffer from numerous illnesses brought on by this complication, thus worsening their prognosis.

General information on hypercoagulability in dogs

Thrombophilia (sometimes called hypercoagulability or a prothrombotic state) are blood coagulation abnormalities that increase the risk of thrombosis. In these cases, clots occur inside a blood vessel, blocking it and not allowing blood to circulate.

This creates a thrombus that can fragment into emboli and travel through the bloodstream, obstructing blood flow in other places.

For hypercoagulability to occur, there must be a hemostasis disorder. In other words,a disorder in the body’s ability to stop bleeding.

Hypercoagulability in dogs: factors that predispose the animal

There are three main risk factors. In medicine, they’re known as Virchow’s triad:

These mechanisms work to prevent thrombus formation under normal circumstances and limit and localize clot formation. If one or more of these mechanisms fail, then thromboembolisms occur.

Causes of hypercoagulability in dogs

Below, we’ll explain some of the most common causes of excessive blood clotting, or hypercoagulability, in dogs.

This disease is an important cause of death in dogs due to the appearance of thromboembolism. It’s more common in middle-aged animals, and females also seem to be genetically predisposed to it.

Its appearance is associated with the consumption of certain chemical substances or medications and with the presence of some bacteria and viruses, tumors, or lupus, etc.

In most cases, the cause is unclear, and the veterinarian diagnoses it as idiopathic.

In other words, veterinarians consider them typically hypocoagulable animals with a tendency to bleed. Recent studies suggest that hypercoagulability may also appear.

This is an endocrine system disease that causes the adrenal glands to work excessively.

There are many causes. However, in dogs, it’s more commonly due to a pituitary gland tumor or a tumor of the glands themselves. Nevertheless, it also appears due to excessive administration of corticosteroid treatments.

Thromboembolic disease is one of the most serious complications of hyperadrenocorticism. For example, when hypertension occurs, blood vessels are damaged, antithrombin is lost, and clotting factor levels increase, etc. In other words, everything contributes to the appearance of prothrombotic tendencies.

Other illnesses that occur with hypercoagulability in dogs: sepsis

Experts have described numerous clotting disorders in cases of sepsis and systemic inflammatory response syndrome (SIRS). For example, a clotting factor known as tissue factor tends to become overactive in these cases.

Thus, the activation of body anticoagulants, such as protein C, also reduces. Even when the immune system activates, platelet aggregation activates, sometimes in excess. In other words, in the case of sepsis, it’s very likely for a hypercoagulable state to occur.

The incidence of thromboembolism in cancer is high and also seems to increase when the dog is treated with chemotherapy. This is why veterinarians establish anticoagulation protocols in these patients.

This hypercoagulable state in cancer is multifactorial and affects the three factors of Virchow’s triad. In fact, the tumor cells themselves can stimulate prothrombotic properties.

Is it possible to prevent these clotting disorders?

In addition to treating the aforementioned diseases, a series of guidelines can help prevent the onset of thromboembolisms. Pets need to lead healthy lifestyle habits every day.

Also, it’s important for them to stay active and go on long walks every day, whenever possible. If your dog has a genetic predisposition, then it’s very important for you to take them to a veterinarian as soon as possible to consult the possibility of permanent treatment.

Important Information Regarding Hemophilia in Dogs
Hemophilia in dogs is a serious hereditary illness. To find out more about the cause, diagnosis, and treatment of this disease, read today's article. Read more »
Link copied!
Interesting Articles
Profesional Advice
Is It a Good Idea to Have a Fennec Fox as a Pet?